How do you sell a book these days? With a video, of course.

Here's the "book trailer" that video producer Tim DuFour made for the book I helped write, Mark Weber's Tell My Sons.

Some days Mark is dying of cancer—last week he was on his back after a sepsis attack. Some days he's living of cancer—last night he kicked off an NHL hockey game. In any case, it's good to have this to help introduce him and his book indefinintely.

Last night was the launch party in St. Paul, for Tell My Sons, the book I helped Lt. Col. Mark Weber write before he dies. (It's now available in hardcover, and makes a great Christmas gift if Mark and I don't say so ourselves.)

The sorry remainder of my mind is thinking that I'd like to do this kind of collaborative writing again—and meanwhile knowing that this kind of project doesn't come along often. A partner this smart, this appreciative, this confident and humble and who's working as hard as I am, on the ultimate deadline? I've been to the mountaintop (as I describe on the Huffington Post) but will I ever get back?

* The above was actually written last Friday, in advance. Tomorrow, when I get my bearings, I'll tell you how I really felt today.

When I told my sister Susan earlier this summer I was helping a dying Army officer write a book for his young sons and then showed her this video, we cried and she told me, "You must be so strong to work on a project like this."

I didn't disabuse her, because sisters need to think their brothers are strong, and brothers need their sisters to think they're strong.

But strength isn't my strength. Compartmentalization is.

After reading Lt. Col. Mark Weber's journals almost as a favor to a speechwriter friend who recommended me as a potential editor, I went all Han Solo on Weber's ass: I told him that his project was probably doomed. I told him I wasn't sure I was up to helping him organize it, and he was surely too sick to rewrite the book beginning to end.

When he was only encouraged by my candor—terminal cancer patients get a shortage of that—I told him it was time to talk money. A fellow can co-write an artitle pro bono. But doing a book out of symapthy is about as sustainable as getting married out of guilt.

We came to financial terms. Then quickly (and somewhat miraculously) conceived and agreed upon a structure. Then set to work. Work. Between a sepsis attack, a dangerous surgery and his retirement ceremony presided over by Joint Chiefs Chairman Martin Dempsey, Weber wrote, I critiqued, Weber rewrote and I edited a chapter per week for roughly eight weeks. 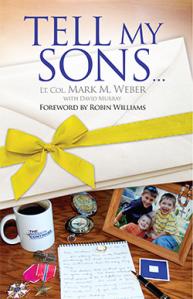 We started work in late July. The book, Tell My Sons, is available now for Kindle and will be in print the first week of December—in time for the holidays. And it's good. (I hope you'll buy it.)

In the meantime, Weber and I enjoyed a collaboration that burst out of the confines of the editorial. I have a hard time describing our partnership, except to tell you that at one point Weber wrote to me that my notes about about his chapters, no matter how full of praise or criticism, came to him like "a Christmas present." My wife read that, and her eyes filled with tears and she put her hand on my shoulder. Which was like a Christmas present.

One of the campier lines in Star Wars comes before the big Death Star battle scene, when Luke Skywalker chides Solo for not joining in the suicide mission. "Take care of yourself, Han. I guess that's what you're best at, isn't it?"

I didn't need to be selfless to work on this book, or strong. But the next stage of this suicide mission—the one where my brand-new buddy Mark stops emailing me back with his funny observations (it's his humor that I'll miss the most)—that one, I might need some strength for. Are you listening, Sis?

But you can't grieve in advance, and Mark is still here with his family, so let's be grateful instead.

I've said it before: The only prayer I ever offer is: Put me to useful work.

This holiday, it's sincere thanks I'm giving.