Written last night, in an attempt to be productive even while watching TV. —ed.

When I was in my mid twenties, I remember trying a couple of times to write a stream of consciousness thing on my 1923 Underwood typewriter—or it might have been my 1931 Remington Noiseless—while watching a regular-season Chicago Cubs broadcast after work. I figured baseball was evocative enough even without daft WGN announcer Harry Caray adding comic relief. With Harry, and a six-pack of Leinenkugel, maybe I could produce a little light American literature.

It was the first live-blog, I guess. I remember being disappointed with the results. The problem was, I had nothing for baseball to evoke.

I remembered that tonight, as I settled in to watch the seventh game of the 1952 World Series between the Brooklyn Dodgers and New York Yankees at Ebbets Field, on YouTube. 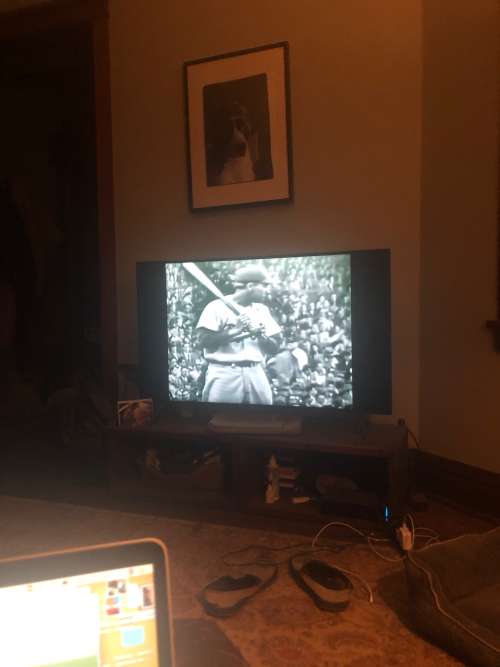 On the call is the Old Redhead, Red Barber, and on the field are an astonishing number of players whose names everybody knows. Watching this game is like the first time you drive around L.A. and realize you know all the streets: Ventura Drive, Rodeo Drive, Santa Monica Boulevard, Sunset Boulevard. Mickey Mantle, Billy Martin, Yogi Berra, Johnny Mize for the Yankees, with Casey Stengel as the Yankee's manager. Jackie Robinson, Pee Wee Reese, Gil Hodges, Duke Snider for the Dodgers, not to mention catcher Roy Campanella, who has the biggest ass of any professional athlete whoever laced them up. Actually, all these asses look big, but Campy has some serious junk in his trunk.

Q. Where have you gone, Joe DiMaggio? A nation turns its lonely eyes to you. 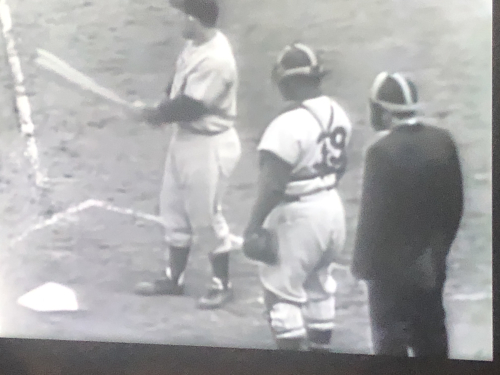 Right now the game is tied 2-2 in the bottom of the fifth and the Dodgers are threatening, with Robinson at the plate. Oh, Robinson lines out to third and the inning is over.

Jesus! Mantle just homered in the top of the sixth and the Yanks are up 3-2.

Between the writing and the watching, I can't keep up. Just like life itself, these days. (This is where I got my hair cut this morning.) 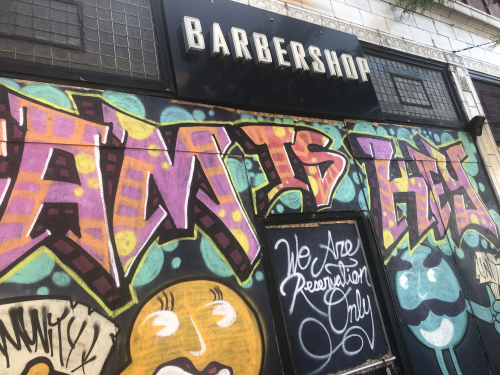 Anyway, I am here to tell you that Jackie Robinson was a true pitcher's nightmare. If he got on base, he got to third. And when he got to third, he danced and darted off the base threatening to steal steal home, and how the opposing pitcher ever threw a strike under that distraction is a mystery to me. The thing about Jackie Robinson that I'm really just realizing tonight is that it just wasn't that he looked different. He played different. And goddamn it, that scares other players. (Evocative, I'm telling you.)

We're in the bottom of the sixth and Campanella is on first with nobody out. Never mind, Hodges just hit into a double play. The Dodgers are never going to beat the Yankees, are they?

Why am I watching the 1952 World Series in the first place? Because the national anthem was sung by Miss Gladys Goodding, who also played the organ. And before Miss Gooding sang the anthem, there was a solemn announcement about the importance of preventing forest fires. (In Brooklyn?)

Mind you, I'm not nostalgic for national anthems without people kneeling. Or for national anthems without people bitching about people kneeling. Nor a nation whose biggest broadly acknowledged problem is forest fires. I'm nostalgic for not feeling haunted, all the time. That's how I feel these days, even when I'm happy—especially when I'm happy. Haunted, by my knowledge of trouble, for people I know and people I don't. And trouble looming ahead, and nobody seeming to know what to do about it. Me included.

Strange days have found us.

Strange days have tracked us down.

They're going to destroy

Goddamn Mantle just drove in another run, it's 4-2. "The magnificent Mickey, just 20 years old," cries co-announcer Mel Allen, "driving in his second run, his fifth in the series, and his tenth base hit!" Fucking Yankees.

Bottom of the seventh, the Dodgers have something going—first and second with one out and Reese is up.

The Scooter walks, and The Duke comes to the plate with the bases loaded and still only one out.

("I'm hearing booms outside my window to the west," a Gold Coast friend says on Facebook. "Making me nervous.")

A ball and a strike to Snider. Foul ball, one and two. Curve inside, two and two. "And the crowd, oohing and ahhing." Ball three. "Boy, the crowd is roaring now!"

Pop up to third, two outs.

Then Robinson pops up and Martin makes a great catch. At the end of seven, Yankees 4, Dodgers 2.

I should go to bed. I know how this ends.

But what about you?

And what about the haunting?

We've got to see this through.

One more half glass of Four Freedoms vodka and lemonade. "Somebody get me a fuckin' weiner before I die!"

Two outs in the bottom of the 9th. Reese up, Snider on deck. Stengel shouts from the dugout, "Watch out for the bunt!"

Two balls, no strikes on Reese.

Strike one, two and one.

"And the crowd is standing, most of them are standing!" 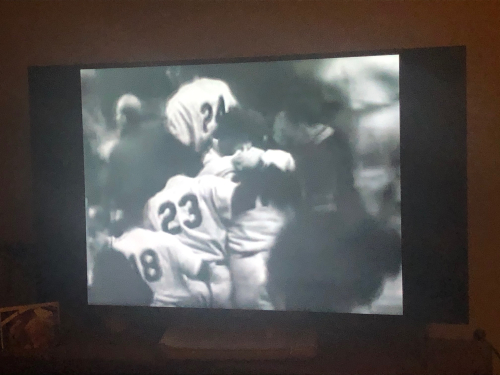 Yankees announcer Allen and Dodgers announcer Barber agree that it's a shame that either team had to lose, and both teams covered themselves in glory.