I felt an increasingly familiar annoyance yesterday when a speechwriter posted a link to an article in my Vital Speeches of the Day LinkedIn group under his own headline: "Buried beneath the Ukraine hysteria, news of real consequence."

Because I'm working on a book titled, An Effort to Understand, lots of people seem to think I'm one of these mincing "civility" twerps no one can stand. I find myself spending a lot of time convincing you (and reminding myself) of the difference between surface "civility" and honest communication.

But we do need a modicum of the former to facilitate the beginning of the latter.

If you call yourself a communicator—because you're a professional writer, or the head of an association of professional speechwriters, or just a person who was told as a kid, "united we stand, divided we fall"—I think you shouldn't indulge in purposely insulting, dismissive language these days. Not casually, anyway.

This is rich, coming from a writer who spent his 20s falling in love with H.L. Mencken, who purposely, bombastically and hilariously dismissed whole swaths of the country—the South, for example—merely in order to "stir up the animals," as he put it. And the same guy who delighted in reading—and to an embarrassing extent aping—Hunter S. Thompson, who wrote that the nation was largely populated and ruled by greedy "waterheads" and "pigfuckers." 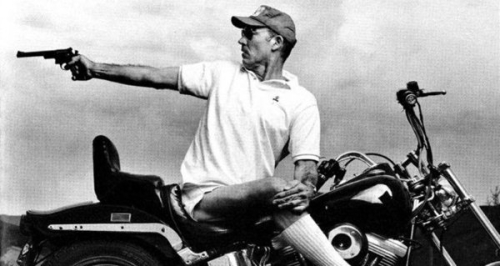 My first boss Larry Ragan followed the P.T. Barnum dictate: "If you want to draw a crowd, start a fight." He once made an offhand remark in his newsletter that drew letters from one third of the readership. I still don't mind a healthy argument. And a healthy argument still puts butts in seats; witness the effect on Writing Boots readership of my analysis of Greta Thunberg's speech a couple weeks ago.

But it seems more and more important to incite one's battles carefully.

For instance, these days I cringe when communicators on my Facebook feed (and thus in my political tribe) call all Trump supporters idiots. Do they think they're doing more good (perhaps giving their friends the courage of their convictions) than harm (making it just that much harder for American reconciliation after Trump is gone)?

And what was the speechwriter who posted in my forum attempting to achieve by offhandedly referring to "the Ukraine hysteria"? Does he incorrectly assume all our readers think the Ukraine story is hysteria? Or is he aiming at those of us who take the Ukraine story seriously, and starting his persuasive appeal with a backhanded slap across our mouth? Or is he in Social Media Magical Thinking Mode, where you post stuff and picture only friendly followers seeing it, and the rest of the people not seeing it?

In any three of those scenarios, the speechwriter is not thinking like a communicator. If he's thinking at all, it's like an instigator.

And boy, have I loved me some instigators in my day.

Not these days, though.

These days, we need communicators. Careful communicators, who seek more constructive results than "stirring up the animals."

Because the animals are already stirred up.