"As former Trump staff seek to integrate themselves into American civic and business life, it will be important to evaluate which of them can be rehabilitated," Frum wrote in The Atlantic, "and which have compromised themselves in ways that cannot be redeemed."

Frum seems to find Spicer, for one, permanently wanting. 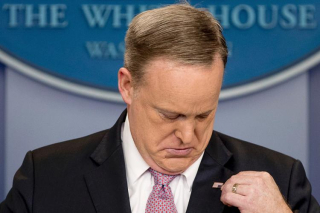 That's a strong point of view, especially coming from a White House speechwriter who coined the term "axis of evil," and helped build the case for the invasion of Iraq.

But I think Frum is right on this one, and I'll tell you why.

Fresh out of college, pure of heart and clear of mind, I went to work as an assistant editor at a weekly trade publication called Speechwriter's Newsletter. (I had missed the cut at Bowler's Journal, because the other kid who applied had more experience, in bowling. No lie.)

What I immediately wanted to know from the speechwriters who I interviewed on the phone and met at conferences was: Do you write things that aren't true for people with whom you disagree?

A young English grad who still harbored major literary and journalistic ambitions understandably shuddered to speak with older counterparts who might now be using their writing ability to persuasively articulate ideas they did not believe to be true.

The speechwriters' middle-aged response to my polite but urgent question was essentially, "Life's more complicated than you think, Kid."

I was earnest, but not self-righteous. I accepted their point of view, and quietly hoped that I would find a more honest, less morally fraught path in my own writing life.

Twenty five years later—after adventures as a freelance journalist and freewheeling commentator both inside the communication trades and far afield—I now run the Professional Speechwriters Association, which I founded.

As far as I am concerned, my feelings about the people our members work for do not enter into it.

Frum calls out Spicer for simultaneously:

Whether you're a press secretary or a speechwriter, when you admit to lying to the public on behalf of your clients, "you lose the right to get huffy about your integrity," as Frum puts it.

Speechwriters are not a huffy crowd in general. (My dad told me that most people get quieter as they get older, because they have more to be quiet about.)

But neither are speechwriters amoral or nihilistic.

Most can tell a story like the one that President Clinton speechwriter Terry Edmonds told a PSA World Conference last year, about being tapped by Clinton to write the speech announcing the Welfare Reform Act. Edmonds, the first black White House speechwriter, had had firsthand experience with welfare as a child growing up in Baltimore. Clinton thought Edmonds could handle the subject sensitively.

But Edmonds disagreed with the policy—along with a number of other prominent African Americans in the administration, one of whom resigned in protest of the bill.

After much agonizing, Edmonds decided to write the speech that announced the bill he disagreed with, because he decided he’d rather have a say in the way Clinton explained the bill—making sure the speech discussed methods “for helping people get off welfare in a way that did not destroy their lives”—than to have no say at all.

In the end, the speech Edmonds wrote stressed as another speechwriter’s effort likely would not have, that Clinton was “not abandoning his commitment” to help people up from poverty.

Yeah, it's complicated, Kid. The truth is elusive, and telling it is tricky. The public interest is debatable, and serving it is fraught. Leaders are imperfect, and leaders are needed.

It's Sean Spicer and his White House successors who are trying to make political communication sound like a simple matter of loyalty to the client no matter what.

Sorry, Sean. It's more complicated than that.