Gingrich is making fun of "Uncle Bill," who tells a story—a fantasy story that doesn't involve Bengazi, email, Libya, etc. He calls her hard-working and smart—and also the most corrupt candidate who's ever run for office. "She would be horrifyingly corrupt as president, and she would be a disaster in foreign policy." Back to MSNBC, where Rachael is probably still quibbling about the implied sexism of Bill Clinton's hoary love story.

If Larry King took a shit and the shit was Wolf Blitzer, Larry King would start eating spicier foods. To FOX!

Maddow hated the love story at the opening of the speech because it was about "a girl," and struck her as anti-feminist. Got it. Probably a good point. Moving to CNN to get the banal take on it.

I'm sitting here with my mouth hanging open. Are you? Or is it the gin talking?

"Good for you. Because earlier today, you nominated the real one." I always know a speech is good when all I'm doing is transcribing it.

Hillary Clinton is "the real one."

This speech seems utterly spontaneous and totally planned. This man is a genius. I've either never seen it before exactly, or he's giving the speech of his life. (Or both.) You tell me.

He really does admire the living hell out of her. Whatever you think of their marriage—and I'm sure I think the same stuff, and I've never liked this guy very much—do you doubt the sincerity of his admiration for his wife?

Okay, he skipped over the horrors, and we don't mind—and he's telling a common dorm-room story that seems incredible and rings true. Those are the best ones.

"She's been around a long time … Yeah … she's sure been worth every single year she's put into making people's lives better." Gone, over the left field wall.

This man is killing it in every way it can be killed. I almost dare to hope he's going to address some of the horrors he visited on her and make this speech truly remarkable.

And the audience loudly lends credence to his point about the lasting power of the advocacy group she established.

"Let's get back to business. I was trying to get her to marry me." This reminds me of stories I used to listen to as a kid, on the record player.

Swear to God: I just Googled the term "sliming fish" and Hillary Clinton came up first, second, third and fifth.

Not a word wrong in this speech so far. Not a word.

Bill Clinton about to give a big speech looks about as nervous as Muhammad Ali about to defend his heavyweight championship in Madison Square Garden.

It's bullshit because the whole point of a speech is everybody sits down and shuts the fuck up and hears the speaker out without interrupting.

I live-blog anyway on some occasions—State of the Union Addresses, for example—that I don't actually consider speeches, exactly, but rather public rituals more fun as communal word parties than as solemn, solitary communication moments.

No one, including the Vice President or the Speaker of the House, ever listened to a State of the Union Address without getting a beer halfway through, switching over to the ballgame, or taking time out to have a sexual fantasy. So what's the harm in a little live-blogging, too? 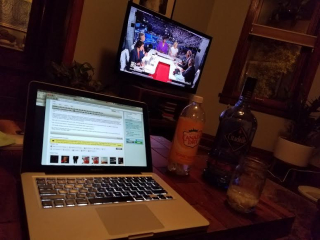 With convention speeches, live-blogging is less justified, as far as I'm concerned—especially live-blogging by the boss of the Professional Speechwriters Association. Here, a speechwriter and a candidate worked together to create a coherent communication, and I'm going to listen to one paragraph and ignore the next to comment on the first. Then tune into the third not having listened to the second, and check out for the forth to write again. What kind of an asshole?!

Why will I do it anyway? Because it's fun, and because like most Americans, I have a serious case of AD—oh, there's a shiny thing.

Also, because my readers—communicators and friends alike—seem to enjoy it.

And finally, because you can't tell me it's bullshit, cuz I've already admitted it.