Out of all proportion, I'm enjoying A Double Life, a fine biography of one of the great assholes of the 20th century, Norman Mailer. 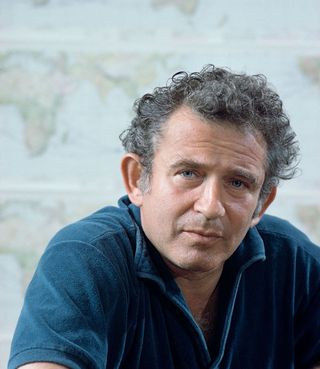 (Really, Mailer wasn't an asshole. He was the asshole. Here's his explanation about how he left his wife Adele, who he had drunkenly stabbed and nearly killed several months earlier: "I went to a party and met Jeanne Campbell and we spent a day and a half in the sack. That was the last straw [for his marriage], that and the fact that Adele wanted me to quit drinking because her psychoanalyst said I had to. I said I couldn't quit drinking then or I'd get cancer, but offered to drink outside the house a couple of nights a week. She wouldn't accept this, and so I moved out.")

Mailer is so full of everything: beans, shit, piss, vinegar, himself, unwisdom and unwisdom—all expressed so well, that you can't help but get caution, instruction or inspiration from every direction, including up the rear end.

And I can use some.

I'm more fully absorbed in one single project than I've been since I can remember. I've spent the last fifteen happy freelance years flitting from adventure journalism to widely variable, mostly agreeable regular-paying gigs. "The Grasshopper," a friend used to resentfully call me.

Now? I'm not exactly planning an invasion of China, but these days I am primarily focused on building the Professional Speechwriters Association into something that some hundreds of people can safely and happily call their professional home. We've got the roof on, but we've got to get the drywall and the siding up before winter.

The task requires most of my time, energy and attention. It's fun—and actually it's a relief, to have my work cut out for me. But occasionally I get nervous, as grasshoppers will.

Mailer, in the 1960s, worried about the same thing. He was digging into a massive novel, written as serial magazine articles, on deadline. It would preclude other work for most of a year. He found justification and solace in an anecdote that he shared with an old friend, in a letter:

Years ago, Theodore Reik was being analyzed by Freud, and as a talented young man he was naturally interested not only in being a superb analyst but a musician, a writer, a lover, a boulevardier, a vigilante, even a mad genius. Freud listened and got angrier and angrier. Finally, he said, "Reik, you want to be a big man? Piss in one spot."

Except, of course, I'll never quit my side gig, as a boulevardier.