Tomorrow is my oldest sister Cindy's 67th birthday. I don't know what to give her. But here's what she gave me earlier this summer: She came to my house, and took my grandfather GaGa’s ghost home with her.

Cindy was here in Chicago for the weekend, visiting from her home in Denver. She retired about a year ago from a high-powered career as an executive at several big-city nonprofits.

My three other sisters, who live in Colorado and see Cindy frequently, had been telling me she’s a different person since she retired. My sister Piper had forwarded me a light and loving email exchange she’d had with Cindy “just to give you a sense of how happy (and adorable) Cindy is these days.” 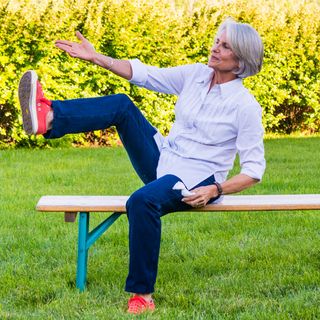 And beaming with energy—as I found out during her visit.

In three days, she planted a vegetable garden for my 10-year-old daughter and showed her how to take care of it. Then she attended my daughter’s soccer game, and asked her a million sincere questions about how she plays the game.

She accompanied me to a University of Chicago literary festival.

She took our car across town to visit the son of a terminally ill friend of hers.

She gently offered cooking tips while praising the surprisingly edible results of my amateurish efforts in the kitchen.

She happily helped me put on a dinner party for another friend of mine, also visiting from out of town.

She stayed up late one night with my teacher wife, talking about education.

She stayed up late another night with me, talking about our family and its history.

Inevitably, we talked about our father, and our father’s father, GaGa, who died before I was born. Charles Murray had been a top executive at a steel company in a steel town, during the boom years of the 1920s and 30s and 40s and 50s. A life of urgent trips to Washington in Pullman cars. Of union representatives arriving at the back door to speak in hushed tones. Of ribbon cuttings at libraries with the company name on them. President Truman asked him to go to Europe in 1946 to assess what was needed to rebuild Germany's devastated industry.

And then retirement. Mr. Murray moved out of the steel town where he’d been so important and relocated to Florida, as Charlie. To pay back his long-suffering corporate wife. “It’s her turn,” GaGa told my father.

When GaGa came back north to visit, he hid bottles of Old Grand-Dad bourbon all over the house. When Cindy and her close-sister Susan—they are actually my half-sisters; Piper and I are from my father’s second marriage—visited their grandparents in Florida, they remember urine all around the toilet, because GaGa, drunk, had lost his aim. An older cousin remembers GaGa standing over the kitchen sink repeatedly washing down shots of bourbon with glasses of water, to brace himself for a family dinner.

GaGa drank and smoked himself into a throat-cancer death within a few years after his retirement.

“I just remember thinking he was lonely,” Cindy told me during our late-night talk.

I thought everyone who retired felt that way, I said. Lonely and useless and left behind. Work is what makes us participants in the planet. Quit working, and you have quit life. I understood exactly what happened to GaGa, and resolved never, ever, ever to retire.

But now here comes my sister Cindy. She sits on a few local boards and she does a little consulting work, which, she acknowledges, helps her feel important. She takes long trips abroad with her photographer husband. She answers family emails promptly and thoroughly and sometimes elaborately, and doesn’t expect the same in return from her younger, working siblings. She sends us detailed and thoughtful recommendations about books and movies, and she doesn’t ask us whether we’ve followed them. She says she is “overwhelmed” with things she wants to do every day, and jokes that she spends whole days just reading, watching, researching and cooking from suggestions gleaned from that morning’s New York Times. She says her husband shakes his head at her constant activity.

When I first told Cindy how good her retirement looks to us, she scoffed a little. “Right. I’m not sitting on the back porch in my brown suit and tie drinking Old Grand-Dad. In fact, I’m hardly drinking at all now that I quit working.”

But she didn’t disagree when I told her that the anxiety that attended her personality when she was working and juggling kids, friendships, intellectual pursuits and hobbies with a demanding career—that all that tense energy now seemed channeled toward curiosity, enthusiasm and openness. Which had an effect on me; the weekend she was here, she casually told me things I’d never heard before, and I heard myself telling her things about my life and my feelings she never knew. (And maybe I didn’t, either.)

GaGa’s story was a good cautionary tale. But as I try to incorporate into my thinking the more optimistic story of my big sister Cindy, I’m starting to think I read the warning wrong. It didn’t say, Don’t ever retire, because you won’t know what to do with yourself.

It said something much more demanding than that. It said, Live your whole life in a way that, when you stop working full time, you’ll know exactly what to do with yourself.

Before we turned in, after midnight, I asked her how she figured this out. She shrugged. She just did.

If I ever manage to retire, and do so gracefully, maybe my daughter will ask me how I learned to live happily ever after. I’ll tell her: Your Aunt Cindy showed me how.

Photo credit: Brother-in-law and fine photographer John Abramson, who probably deserves some of the credit for Cindy's happiness too.