Eventually my mother stopped going to even the one or two cocktail parties and business dinners to which my ad-agency chairman dad asked her to accompany him every year. Why? Because she hated "small talk." This is what my mom looked like at such events: 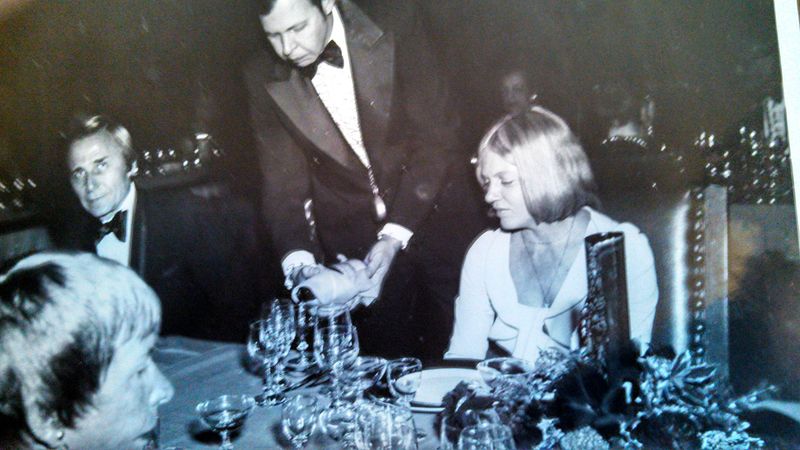 That look, in case you have to have know my mom to interpret it, says, "Thanks for the wine, but there isn't enough of that stuff in your whole kitchen to make these people interesting." The look on my dad's face is dread of the car ride home, when she will excoriate him for having seated her next to the legendary professional golfer Ken Venturi (right, not pictured). Or, as my mother referred to him, "That plastic fucking asshole."

But what is "small talk"? And should any human being—especially by a novelist like my mother who should always be plumbing human character—be dismissed as "plastic"? I've come to believe the answer to the latter question is, "no." (And I've since learned that Ken Venturi, now dead, had a desperately intense and unrequited love for his father; I've seen him cry about it on television. Plastic assholes are people too.)

"Small talk is an essential part of the social contract," write coauthors Chris Colin and Rob Baedeker. "It allows us to engage and identify common ground with safe, low-risk topics. … It uses banal or mundane topics as proving grounds where we can establish a comfy initial rapport with the other person. Using small talk, we feel one another out and map the spots where we want to dig deeper."

Of course, the implication is that one wants to dig deeper. And I'm not sure my mother wanted to have a good time, or meet interesting people at these gatherings. And I imagine she had her reasons.

She may also have been unskilled at making the second step from small talk—recognizing a spark of unique mutuality and carefully fanning it into a meaningful conversation. I find that skill is a harder. (I just throw gasoline on the bastard, as often dousing the spark as igniting it.)

If you want to get better at talking, read What to Talk About. If you don't—well, leave poor Ken Venturi alone.