I try to avoid actually providing anything useful on this blog, lest people think they can get something for nothing. But sometimes I just can't help it.

On Monday, the big story was the Kagan nomination for Supreme Court. The New York Times ran stories, but they also ran a six-shot photo-album.

If you just clicked through the photos—and how could you not want to see this curious-looking woman from a few angles? Christ, she looks like Otto Pilot, from the movie Airplane!—you learned about as much about Kagan as anyone knows, just from the photo captions. 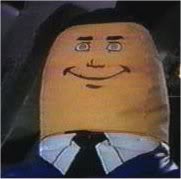 1. Elena Kagan, the solicitor general, will be nominated by President Obama to be the next Supreme Court justice, Democrats said.

2. Her nomination would fill the vacancy left by Justice John Paul Stevens's retirement. Ms. Kagan has never been a judge.

3. Ms. Kagan is known for her easy banter with the justices. She spoke with former Justice Sandra Day O'Connor at a conference in 2009.

4. Ms. Kagan's appointment will require Senate approval, and both sides of the aisle are gearing up for potentially contentious hearings.

5. Born in Manhattan, Ms. Kagan, here in a 1977 yearbook, received degrees from Princeton and Oxford before attending Harvard Law.

Pretty slick, NYT. Pretty damned slick. And a lesson to us all.