The fifth installment on my midlife motorcycle trip, for my daughter to read someday and anyone else to read today. —DM

There is a point in every journey when you realize how very,
very far you are from home, and you face the fact that the only way back is to continue doing the
tiring, repetitive, nervous-making and difficult work that got you all the way here.

The first time I remember experiencing this was on a sailing
trip down the coast of the Baja Peninsula, and it occurred to me that between
me and a flight home was 30 miles of ocean to the coast, and then even if I
somehow got across that, I’d crawl ashore exhausted, into a desert.

On this trip, I didn’t feel truly stuck in the journey until
a rainy, hair-raising trip on the south end of the Cabot Trail. We were exactly as far away from home as we could be. Meanwhile, the rain
pin-pricked my face, the slick pavement eroded my nerve. Less-maneuverable cars were piling up behind me on some of
the coastal stretches. I suggested we stop at Baddeck, to wait out the rain.

After a week of rain, the notion of waiting it out seemed
less practical than trading in our motorcycles for a boat.

So we drank beer at the Baddeck yacht club.

Being far away—and being stuck far away—is psychologically difficult. A friend of mine tells me he doesn't like to travel because it's a
painful reminder that people get along in other places without him.

But it has advantages, the most important of which is that it makes it hard to take a self-centric view. Which makes it easier to see other people.

On this trip, the most thought-provoking insight I came to was that in Canada—at least in the eastern
provinces that I was traveling in—at the
very least in the places I visited in these provinces—women are utterly
in charge of things, and everyone seems happier in the arrangement.

First, I was bowled over by the utter beauty of a scene at a
B&B on the eastern coast of the St. Lawrence, in Kamouraska, Quebec. The
B&B owner (she had a husband, who was friendly and even witty, but a mere
spiritual sliver of the charismatic, funny, utterly intelligent wife) sat
behind the front desk talking on the phone while her two daughters, maybe eight
and eleven, stood beside her, all three touching each other, the picture of
maternal warmth.

Not long after that, I started keeping a list of scenes of
impossible happiness, all of them with women in the center, and men either
playing bit parts—Brown-Haired Man #2—altogether nonexistent:

The winking barkeeper at the near-empty pool hall in Hawksbury,
Nova Scotia, who got herself a big tip by keeping the beer and the smart
remarks coming and making us feel like we were just the young rogues we used to
think we were.

“You must be so excited!” said the starter at the Highlands
Links golf course at Ingonish Beach, when she discovered this was our first
visit to the famed course. Especially at good courses, starters are typically
cool and standoffish, their unpleasant way of making you respect the privilege of paying
an asinine sum to grace the pristine links.

Not this Nova Scotia native. After 23 years in the same job,
she gave us a detailed, deep, literate and enthusiastic geological,
architectural and even cultural history of the golf course and the surrounding
community. She told us where to see the most beauty and said she and a friend
of hers had been clearing out some brush on their own time at a certain spot
and they saw two eagles over a stream.

I almost sat down, at her self-actualized feet. 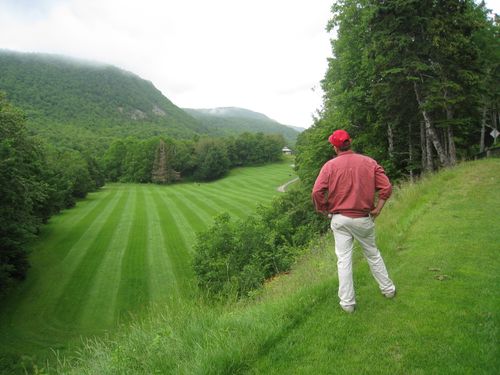 After 23 years of working at Highlands Links, the golf course starter is still stunned by its beauty.

Finally there was the scene at the Bras D’or Lakes Inn at
a town called St. Peter's. One morning, Tom wrangled in the room with work issues, and I spent
a leisurely hour reading and writing in my journal in the lobby, where a
chocolate lab slept peacefully as the sardonic owner of the lodge—the missus,
of course—drank her first cup and ordered her workers around with such a
combination of good humor and decisiveness that I was tempted to apply as a
maid, and spend the rest of my life making beds, not choices.

Her meter-tall husband went out on an errand with a male
employee and she told them, “Have a good time.” They hesitated, looking at her
guiltily. “I just said, have a good time,” she said, looking at me plaintively
and then turning back to the male babies. “For heaven’s sake, go!”

Just then the restaurant waitress came rushing in—she had
been wandering around the inn all morning, singing “A Groovy Kind of Love” near
the top of her talented pipes—to tell the owner how she just got a whole breakfast
table join her in song.

“It was priceless!” she said, and I agreed.

Also priceless, as it turned out, was our stop at the Baddeck yacht club. The
respite from the road, and the cozy familiarity of Sunday golf on the bar
television, the beer—it changed my mood utterly, and as we rode off into the
bright late-afternoon sunshine, my homesickness was gone, and my riding confidence
restored—completely, and for the rest of the trip.