It started raining while we ate lunch in Erie, Pennsylvania
and ripped into our faces and seeped into our boots until we finally slogged into a
motel in Lakeville, New York.

While we sifted through our clothes to determine just how
waterproof our waterproof saddlebags were—about 70 percent, was the answer—we
turned on the Weather Channel to get the next day’s forecast. The guy came on
and prattled ruefully about a massive, stationary low-pressure system that
hovered over the entire northeast of North America and promised rain across the
region for the next week. 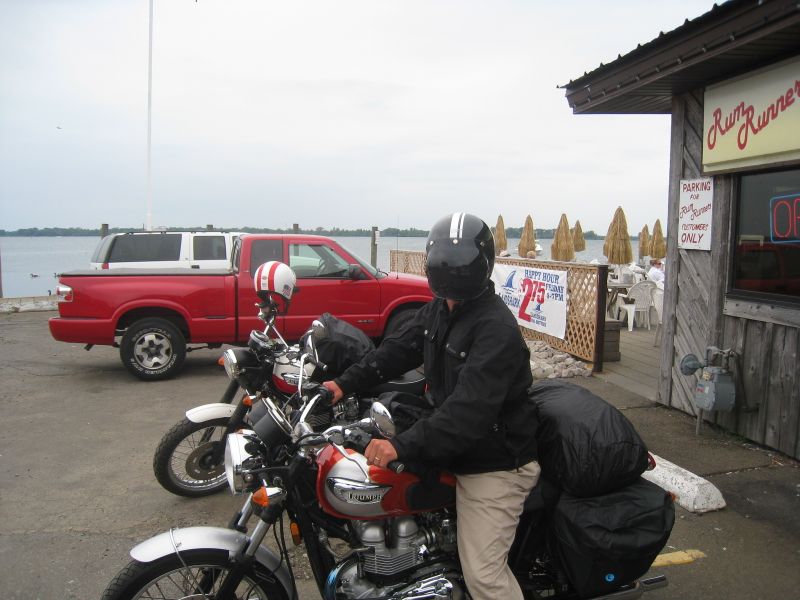 The attachable face shield I'd bought for the trip looked so absurd that I chose to use it only in the most extreme downpours. As I've always said, if you don't look cool on your motorcycle, you've failed to meet your primary objective.

My old college roommate Tom Gillespie gave me a look that said: Tomorrow
morning, it won't be too late to turn around, or change our destination. Tomorrow
evening when we’re in Montreal and at the epicenter of this circling
rainbomber, it will be. Why should we knowingly subject ourselves to certain,
daily misery? This was supposed to be a vacation, wasn’t it?

And Tommy and I know travel difficulty when we see it. We
once drove to Las Vegas from Chicago without stopping: 27 hours and a whole
carton of cigarettes. We smashed up his International Harvester Scout while
four-wheeling in a strip mine in West Virginia, and as I went to start the
crippled vehicle to drive to a hospital to get Tom’s face stitched up, the key
broke off in the ignition.

This trip was inspired, at least for me, by a trip west 10
years ago, on which we bought that Scout, in Albuquerque. Actually, we bought
two Scouts, one for each of us. And we took two motorcycles. And returned to Chicago in two days, a
two-man caravan, one Scout leading the way (it had no brakes, so it was the
natural pace car) and a pick-up truck following, with two motorcycles in the
bed and another Scout on a trailer, behind.

There was a logistical improbability to that story that I wanted
to recreate with this motorcycle trip. And the rain, discouraging as it was, contributed to the built-in insanity of flying thousands of miles holding for dear life onto motorized bicycles.

Were we still capable of doing the
impossible?

After dinner at a roadhouse across the street and a fast six
drinks with an entertaining and equally fast-drinking young local couple, we borrowed
hair dryers from the front desk and went to sleep with them blowing into our
boots. 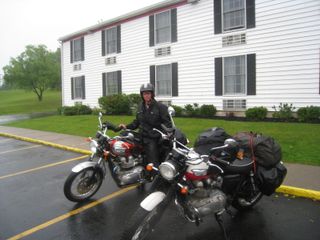 Soaked to the bone in Lakeville, N.Y.

Unexpectedly, the next day was perfectly sunny and we were
off at 9:00, roaring over hills and cheerfully buzzing through the green towns
atop the Finger Lakes. The vistas grew vaster as we approached the Adirondacks,
and I thought of the crass entrepreneurial bumper sticker, “If you ain’t the
lead dog, the view never changes.”

Yes, it does, if you’ll only back off a little, and slide over.

Tom and I ride in a staggered formation, developed over a number of trips, that
has Tom in the left third of our lane, and me in the right third, one man ahead by anywhere from a bike length to 50 yards, depending on the terrain. No matter who's leading, we hold the lane positions, so that the follower can
briefly slide up beside to communicate.

Usually,
Tom is ahead to the left and I'm behind to the right, in a
comfortable slot that lets me see how fast he’s taking a turn or how hard his
bike bounces on a railroad tracks. He’s the more experienced rider, so it makes
sense he’d usually be in the lead. But sometimes I take the lead. And sometimes the lead switches back and forth in a way that, mesmerized by the road and the sound of our engines and the goings-on inside our minds, we hardly notice.

It doesn't matter who's leading, because it's not a race.

Riding side-by-side—that's as taxing in
friendships as on motorcycles. There’s no room for error left or right, and
you’re always having to adjust your speed to stay perfectly even.

No: If you know where you’re going, lead
the way. If I know where I’m going, I’ll lead the way. We’ll pull side-by-side
only in order to notify one another of urgent needs: we need fuel, we missed the turn, your bungee chord is dangling dangerously close to your rear spokes, how about let's stop for a beer at this lodge by this lake.