When riding a motorcycle at night, what you mustn't do is "outrun your headlight." Meaning, ride so fast that you can't stop for obstacles that appear at the end of the beam.

When living, unfortunately, you inevitably outrun your headlight. That is, you live long beyond the last year of age you pictured when you were young, and still making pictures of your life.

At 30, I was still able to judge my life and to some extent even live it based on what I'd imagined it might be, what I'd wanted it to be.

But at 40—with a child but no parents, with a 15-year marriage and a 30-year mortgage, with a head full of dueling truisms and a heart where love and worry jostle senselessly for chamber space—I have outrun my headlight.

So along with my old college roommate who also turned 40 this year, I'm channeling all my uncertainty into a single line—a motorcycle track, from Chicago to Cleveland to Buffalo to Montreal to Quebec City to Fredericton, New Brunswick to Halifax, Nova Scotia.

I'm sure other people have traveled from here to Nova Scotia before, but finding a single road map has proven impossible. To see the whole journey on a single map, I have had to awkwardly tape together six sheets from two North American atlases. They make an ungainly diagonal, bottom to top, left to right. The scale of each differs a bit, so that once you get to Nova Scotia, the getting-back maps—Maine, New Hampshire, Vermont, New York—don't fit. 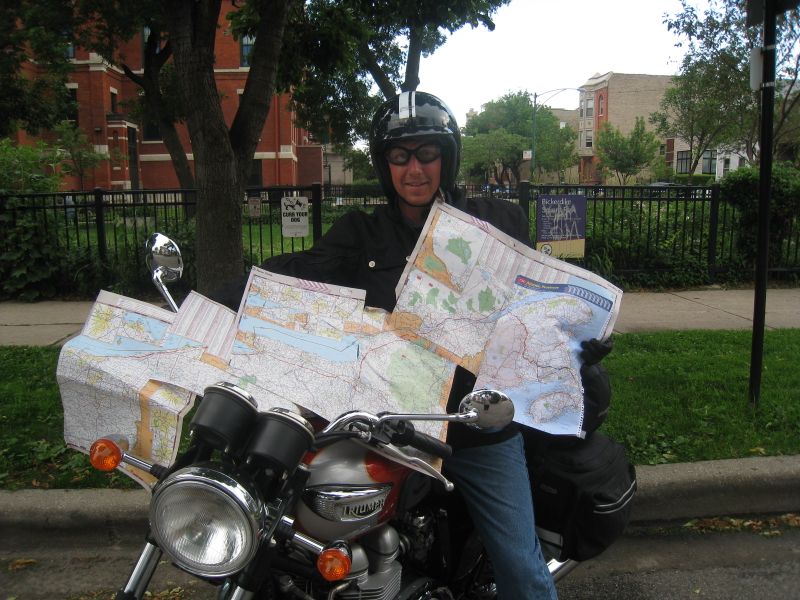 In the beginning of Jupiter's Travels, the 30-year-old book about riding a motorcycle around the world, Ted Simon writes that after weeks of planning the trip as an enthralling obsession, on the eve of his departure "I looked at the absurdly overloaded Triumph … and had my first cruel glimpse of the reality of what I was embarking on. My vision had been dazzled by the purple drama of warfare and banditry. Now I saw, with awful clarity, that a large part of my life henceforth would be devoted to the daily grind of packing and unpacking this poor, dumb beast.

I'm beginning to know how he feels.

Back here in late July ….

6/29 Lakeville (over top of Finger Lakes and up through Adirondacks) to Prattsburgh, NY.