Lyndon Baines Johnson was as close to a sociopath as you'd ever want running the country. Manipulative, abusive, ruthless and conniving: These were some of his best qualities, the ones that writer Robert Caro celebrates in The Passage of Power, the latest in his epic serial biography of the former president. Though Johnson’s power-mad personality hurt him in a number of ways, it also made him the genius of persuasion who passed civil rights legislation that no other president ever could.

But I read Caro's book with the mind of a communicator (because that’s the only mind I’ve got). And as a communication client— 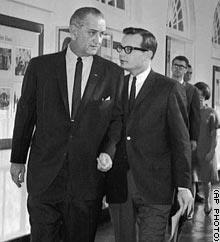 and I believe Johnson’s chief speechwriters Horace Busby, Liz Carpenter and Bill Moyers would back me up on this if the first two were alive or the last one was talking about his Johnson years—President Johnson was close to perfect.

He had the three main attributes every confident communicator looks for in a boss:

1. On core issues, an ideal boss knows more than you. You don’t want to be thinking for the boss, you want to be helping the boss frame arguments she has thoroughly thought through.

For instance: In 1963, when Vice President Johnson was helping make President Kennedy’s case for civil rights legislation, he was invited to make a speech at the 100th anniversary of the Gettysburg Address.

A few days before the Memorial Day weekend, he had Busby come out to [his house], and they sat by the swimming pool and talked, with Johnson doing most of the talking, about what should be in the speech. He expected Busby to follow their usual practice and turn his rough views into a polished speech, but this time the speechwriter didn’t think much polishing was required. “I knew what I had heard,” he says. He had been writing speeches for Lyndon Johnson for 15 years, and he felt that this time Johnson had said exactly what he wanted to say. In Busby’s car was a large, clumsy recording device, and, he recalls, as he was driving away … “I stopped the car a half a block away and recorded what we’d been saying pretty much as” he remembered it, and the next morning took the recording to his office and had the secretary transcribe it.

To the transcription he added two introductory paragraphs and one at the end, and turned it in to Johnson, who delivered it to great acclaim. Its core:

One hundred years ago, the slave was freed. One hundred years later, the Negro remains in bondage to the color of his skin. The Negro today asks justice. We do not answer him—we do not answer those who lie beneath this soil—when we reply to the Negro by asking, “Patience.” … To ask for patience from the Negro is to ask him to give more of what he has already given enough. … The Negro says, “Now.” Others say, “Never.” The voice of responsible Americans—the voices of those who died here and the great man who spoke here—their voices say, “Together.” There is no other way.

Now what writer could put words that strong into the mouth of a boss who hadn’t said them first?

2. An ideal boss knows what motivates the people who work for him or her—including you, the communicator.

Upon assuming the presidency after the assassination of President Kennedy, Johnson needed to retain Kennedy’s staff to give a sense of continuity, and no one was more important to retain than Kennedy’s chief speechwriter Ted Sorensen, whose help he needed immediately, for a speech to a joint session of the U.S. Congress.

Trouble was, Sorensen despised Johnson almost as much as he’d loved Kennedy, whose death he was grieving deeply.

Of all Kennedy’s men, none had been hit harder. McGrory had seen him, at Andrews, “white-faced and stricken, unseeing and unhearing”; as Johnson walked through the West Wing on the way to his office, Ted Sorensen had been sitting alone at the Cabinet table, weeping. … “Kindly, strongly, generously he told me how sorry he was, how deeply he felt for me, how well he knew what I had been to President Kennedy for eleven years, and that he, LBJ, now needed me even more.” Sorensen said, he was to recall, “Good-bye and thank you, Mr. President.” Hanging up the phone, he broke into tears again, “unable to face the fact that I had just addressed that title to someone other than John F. Kennedy.”

And yet Sorensen ultimately stayed on, and only days after Kennedy’s death, drafted the speech that Johnson delivered to Congress.

Just as you would, for a client who expressed such understanding and sympathy to you.

3. Most importantly, an ideal boss believes deeply that communication can make a difference.

Many bosses believe they’ve gotten ahead by keeping their mouth shut and not saying anything stupid. Those are not the kinds of bosses you want to work for. On the other hand …

Working on Sorensen’s draft on the day of the speech to Congress, alone in the Oval Office, hours before the speech, Johnson made edits that show his great instincts as a persuader his conviction about the importance of communication:

And the text wasn’t being edited just for drama.

It was being edited—by this man who knew that he had never been able to speak effectively before large audiences—to help him speak effectively this time, the most important time. To try to keep himself from rushing through it, blurring its meaning and its force—as, for thirty years, despite every effort, he had almost invariably done—he had it retyped in one-sentence paragraphs in an attempt to make himself pause between the sentences. Then, because he had used that device before and it hadn’t worked, he reinforced it by writing in, in hand, between many paragraphs as a reminder to himself, “Pause.” And then, as if he was afraid he would nevertheless still speak too fast, he wrote “Pause—Pause.”

“All I have I would have gladly given not to be standing here today,” he began.

The sentence was eloquent, sorrowful. A hush fell over the Chamber, the hush of hundreds of men and women so intent on a speaker’s words that they barely moved.

The next lines on the page in front of Lyndon Johnson were “No words are sad enough to express our sense of loss. No words are strong enough to express our determination to continue the forward thrust of America that he began.” But the words as Johnson spoke them did express that sense and that determination—because of the way he spoke the: so slowly, with a deep, grave dignity behind them, that they seemed to reverberate across the rows of listeners before him and above him. …

He concluded the speech by slowly, steadily speaking the lines, “America, America, God shed his grace on thee. And crown thy good with brotherhood, from sea to shining sea.”

The speech had been interrupted by applause 31 times and the ovation at the end was thunderous—in the hall as it would be in the press the next day.

“Yet it wasn’t the applause that most forcefully struck some of the reporters watching the scene from the Press Gallery, but the tears. “Everywhere you looked,” Hugh Sidey said, “people were crying.”

Communicators who believe in communication and want to put it to work—and that's not all of us, I know—will look for bosses who believe in it, too. And when they find one, they’ll tolerate some ugly means in order to help those bosses achieve truly worthy ends.