For Chrissakes, I saw a note on Facebook yesterday that it was the birthday of the legendary PR man Chester Burger. I wrote to him: "Happy Birthday, Chet. I still remember our meetings more than a dozen years ago with reverence and fondness. They were formative for me."

And so they were.

They came at a time when I was in a careeer crisis. I'd exhausted the editorial possibilities at Ragan Communications, but didn't know how to further my writing and editing career. I was trying to help Ragan launch a consulting operation, and wondering whether that was really worth my while.

For the first and only time in my life, I went to a guru for advice. 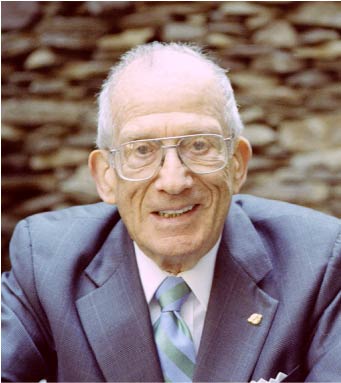 Burger, who I'd met on a weird Air Force PR junket a few years earlier, was the nation's very first television news reporter in the 1940s. He'd gone on to become an independent PR advisor to the CEO of AT&T, a little gig he held onto for 33 years until his retirement. Meanwhile he worked for the United Negro College fund during the civil rights era in the 1960s and worked on the International AIDS Vaccine Inititive in later years. In short, a ridiculously productive American man.

And generous. He met with this 29-year-old near his home on the Upper West Side of New York. I asked him what I should do with my life: writing, or consulting? Chet Burger was the sort of man to whom you would ask such a question.

He told me I should go into consulting, because as a writer, you only chronicle history, but as a consultant you could change its course.

In the course of our conversation, he gave me a tiny example of how he used his consulting skills to go about changing things.

In the early or mid 1960s, he was flown to Paris to join a panel review a proposed advertising campaign by the legendary adman David Ogilvy. The campaign was designed to encourage tourism from America to Europe. When Burger saw the ads, he was aghast. They showed Americans disembarking planes in European airports, and all the Americans were white.

But Ogilvy had flown Burger to Paris, and it would not do to humiliate him in front of this esteemed panel. Worse, criticizing Ogilvy's ad would also get the Great Man's back up, and cause him to dismiss Burger's advice. So Burger opened up with an eleborate list of sincere compliments about the ads: the brilliant concept, the bold headlines, the direct and clever copy, the colorful layout, and on and on and on.

"You know, I might add a few people of color to that crowd of Americans getting off the airplane," Burger said parenthetically. "You know, just to balance it out a little. But that's all I can think of, because the campaign is just stunning."

So substantively flattered by Burger that he now wanted to justify Burger's good judgment by bowing to his suggestions, Ogilvy agreed wholeheartedly and ordered the changes immediately.

Not possessing even a fraction of Burger's tact or persuasive genius, I failed miserably at consulting, and went back to humbly chronicling events and crassly commenting on them.

Burger and I later talked about it, as we kept in occasional touch over the years. He read a few of my pieces and said he liked them and we both agreed I'd made the right decision. Meanwhile, I complimented his photography of New York and we always hoped to meet again.

But I learned today that his 91st birthday came almost a year after his death, which I somehow missed, last March 22.

A tardy godspeed, Chet Burger, and may your magnanimous intelligence and wisdom shine in the minds and out through the eyes of everyone who knew you or who benefited from the changes you made in the course of history.