When you run a professional association, you like to believe you're doing good in the world. And that the industry you represent contributes to the health of humanity. And that the people you serve are mostly virtuous.

If your members are in the heating and cooling business, you glorify them for humbly bringing comfort into people's lives.

If you run a travel association, your members help people explore the world and meet with their loved ones!

And if you run an association of professional speechwriters, you tell yourself—and your employees—and all your other members—that what you're engaged in, as it says atop the ProRhetoric.com website, "Professional leadership communication, to promote greater social understanding."

Speechwriting in general and speechwriters as individuals. In writing and in person, I'm always telling people that most of the people we serve are not just smart and educated, as you'd expect: Warm, by and large. Funny. Thoughtful. Curious. Humble. Intellectually honest.

Praise your customers. As the insurance ad says: It's what you do.

But every once in awhile—and at just the wrong time—one of those valued customers of yours does something that violently contradicts your virtuous view of them (and thus of yourself). One of your HVAC pros takes advantage of an overnight installation at a jewelry store to do a heist, a hotelier covers up a bed-bug infestation … or a once-prominent speechwriter uses his rhetorical framing skills to write something so intellectually dishonest and morally shitty at a cultural moment so crucial that it nags at you all weekend until you finally feel compelled to call it out, even at the risk of being seen as the speechwriting community's self-appointed moral thought-police.

Here's what I couldn't bring myself to ignore: 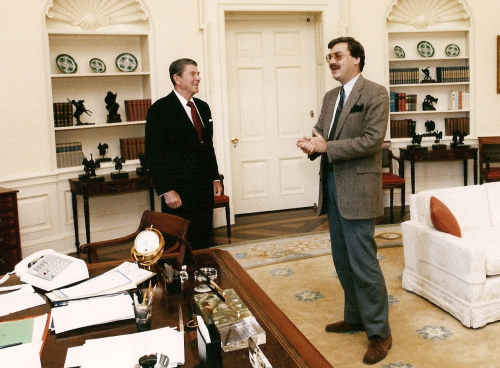 A few years ago, Aram graciously accepted my invitation to appear on a panel of White House speechwriters at the World Conference of the Professional Speechwriters Association. Not many speechwriters have worked for three presidents; I considered Aram a good get.

Long retired, Aram is now a prolific Facebooker. Occasionally, though, he publishes something in the conservative magazine, The National Interest. As he did last week, because, as he put it on Facebook, "I thought this needed saying."

In the piece, headlined "The National Media Is Fanning Hysteria About Racism," Aram portrayed Derek Chauvin and George Floyd as "two less-than-model citizens" involved in a long-running personal squabble that culminated when "Derek Chauvin, the white cop, ended up with George Floyd, the black man, pinned to the ground; Chauvin’s knee pressed hard against his neck. Within minutes, George Floyd was dead."

He went on to blame the aftermath entirely on cowardly liberal Minnesota politicians, sensationalist media and sincere but dumb liberal protesters who served as human shields for leftist domestic terrorist groups.

Finally, Aram arrived at his conclusion: "Spending a few hours in the street demonstrating against bumptious, blustering Donald Trump—the man they love to hate, but who had nothing to do with the death of George Floyd—may make naïve millennials feel good in a smug, self-satisfied way. But it serves no real purpose and certainly saves no lives. You might even say that it’s a criminal waste of time."

Speechwriters are just people—mostly highly educated, mostly middle-aged, mostly white. They share no unifying philosophy, just a common struggle—to help leaders lead, through communication, the best way they know how. There are many speechwriters—many of my favorite speechwriters—with whom I disagree politically. Most of the time, even in this exceptionally divided time, our political differences are neither here nor there.

But if I'm going to glorify speechwriters in general and their hail their contribution to civilization through more articulate and expressive leadership—and that's exactly what I'm always going to do—when a speechwriter uses the rhetorical skills we teach, to so carefully and willfully (and arrogantly and smugly) falsely frame and grossly mischaracterize an American moment as profound as this—shouldn't I also call that out?

I have spent the weekend not with smug millennials nor with smug speechwriters. But mostly with my Chicago schoolteacher wife, who huddled in our backyard Saturday with two women who are dealing every day all day with families on Chicago's West Side who have come by their hysteria honestly and without any help from sensationalist media. And not over the last 10 days, but over the last 10 decades—and certainly the last three decades since my wife and I emerged from our leafy Ohio suburban childhoods to confront social problems in Chicago that we knew nothing about.

What I heard from these women Saturday—an infinite litany of family-by-family, person-by-person desperation of every terrible kind on the West Side of this city—this makes all the demonstrations you see on CNN, even the violent ones, tidy and packaged and manageable by comparison.

Whatever is happening in our country in the wake of George Floyd, and whatever comes of it—dismissing it as "hysteria" is precisely the opposite of what a professional speechwriter—active or retired—ought to be doing. Because speechwriters are trained to write for leaders, and dismissing huge swaths of human beings, whether as dupes or deplorables, is not what leaders ought to do, especially at a time like this.

Aram Bakshian, you've lived in Washington a very long time and in your official biography you list your "pastimes" as "travel, dining and conversation." You don't use a cellular telephone, which is "relaxing," you say. But no matter how proudly out of touch you are, you must know nevertheless that what you wrote was neither an accurate nor a useful version of the death of George Floyd or its aftermath. And you must know even more deeply that by no stretch of the imagination did it "need saying," especially to the dwindling cigar-smoking crowd that reads The National Interest.

To which I can hear your answer now: Whatever the hell that is.

To which I would reply: Some concepts are more visible in their absence.

Aram Bakshian, and speechwriters of all stripes: Especially now, please consider the purpose of everything you use your skills to write, publicly and privately. This is not a time for political playfulness, provocation, popping off to stir up trouble or to entertain your friends. (Much as I love those pursuits myself.)

This is a time for responsibility.