Yesterday we established that among all the wonderful things he was, Muhammad Ali was "an exaggerating, narcissistic racist bully who thinks with his tongue and navigates with his cock," not to put too fine a point on it.

And of course a lot of people hated him for that stuff—(including his second wife Belinda, who caught him balling a prostitute hours before the first Frazier fight and rooted for him to lose it, according to Ali: A Life, by Jonathan Eig).

But a lot of people loved Ali for most of that stuff and in spite of the rest of it—even before decades of his Parkinson's-imposed silence and our historical perspective transformed Ali into a kind of American saint.

Understanding how some people loved Ali in his heyday provides a partial key to understanding how some people love Trump now. And they do love Trump. And they love one another when they're in Trump's presence. Watch them at his rallies. They're not only looking admiringly at him, they keep turning to each other and reveling in his words and laughing in happy astonishment. Covering Trump's speech at the 2016 Republican National Convention, I sat in front of two guys who were gushing. "Look at them eyes!" one shouted to the other. "He looks like he's looking right at you, talking to you personally!" We were fifty rows up.

That's how I still feel about Muhammad Ali today, even at the remove of YouTube—like he's talking to me personally. When I tell people I'm an Ali nut, I tell them conspiratorially, as if I'm letting them in on a little secret—about one of the most famous people in the history of the world. Maybe, if you are very interested—and your heart is in the right place and you have a real sense of humor and just the subtle sense of morality we're looking for, I'll let you into David Murray's Official Muhammad Ali fan club.

The twinkle in those eyes shines straight at me. (And as Ali's shortest poem said, "Me, we.")

I've shown that Ali press conference to audiences of speechwriters and other communication people all around the world, including at the United Nations, to show what it looks like when a speaker charms an audience, brings them into the joke that bonds them together.

I suppose that now, in the interest of fairness, I ought to pair it with this Trump rally clip, that demonstrates exactly the same rhetorical techniques and winking charm—to exactly the same effect.

Ali was also fun to listen to not just because of what he said, but because he spoke as rhythmically and musically as he danced. His words could be set to music.

But the real appeal of both these men is that they consistently defended people who felt downtrodden, insulted, looked down upon and ignored—in Ali's case, blacks and eventually countercultural whites; in Trump's case mostly rural and suburban whites. And they did so by scandalizing and shocking and scaring the living bejesus out of those perceived social oppressors.

And when the rebel is punished for rebuking the establishment, he becomes a martyr.

When Ali was stripped of his title for refusing indiction into the U.S. military, this is how he was portrayed. 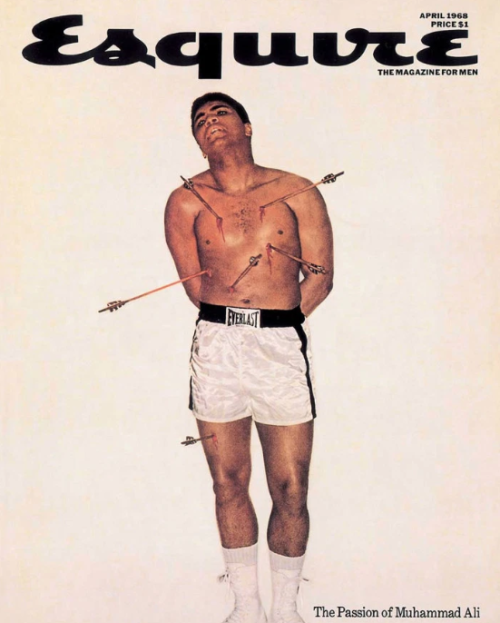 And if you think Trump's followers don't see their man in exactly the same image, then you don't listen to those morning C-SPAN callers, each complaining more earnestly and bitterly than the last about how the Democrats and the media have hounded Trump mercilessly and not given the poor man a chance.

I am not equating Muhammad Ali with Trump; I'm relating to the feelings that I hear Trump followers expressing.

By now, my adoration of Ali is permanent and spiritual, and neither Jonathan Eig's biography nor my reflection for this essay has diminished it. I think Muhammad Ali was essentially a loving spirit with a dark side that his fans don't like to focus on. I think Trump is a dark spirit with a charming side that his enemies cannot bring ourselves to see.

Eig feels the same way, actually. This week I've been corresponding with him and he says he's enjoyed this series so far. He told me he too made the connection between Trump and Ali, especially as he was working on the book during the 2016 campaign. He forwarded to me a quote from a conversation recorded just last week by Washington University's magazine, in which Eig said: "The narcissism, the confidence that no matter what they say, it’s right, and even if it’s wrong it’ll become right because they said it. The love of attention, and yet the failure to treat the people closest to them well. But for Ali, what made it work is that he genuinely loved people. He had this warmth. You wanted to be in a room with Ali, and when you were, you felt like you were the most special person in the world."

Even putting that distinction aside, it wouldn't give the president permission to behave like a prize fighter—as Ali himself pointed out, in an interview in 1974. Asked whether he'd ever consider getting into politics, Ali said no. "If I'm sitting in a white man's office … a White House, or city hall, with the American flag over my head, then I can't say the things I'm saying now, you understand? Then, I have to represent the people."

Alas, our president doesn't have the skills to do that even if he had the interest.

So we who don't feel represented by this president are left to better represent ourselves. And one way to do that is to stop signaling our own virtue by feigning total inability to fathom the minds and hearts of least a third of our fellow Americans.

We know exactly how they feel.