For people who help people learn from their colleagues, Brian Jenner and I sure don't have many colleagues of our own.

In fact, as the only two people on the planet who make our living convening conferences and cultivating communities for speechwriters and other leadership communicators, Brian and I have only one true colleague each—each other.

We talk on the phone a few times a year, but we don't see each other often.

After two previous appearances at Jenner jamborees, I'm happily headed to England next April to speak at the Cambridge Speechwriters' & Business Communicators' Conference 2020. Rarer still are Brian's visits here. The first was at a speechwriting conference more than a decade ago that inspired him to create his group; and the last was at the PSA's first World Conference in New York six years ago.

Until last month, when Brian came to Chicago to speak at a conference unrelated to our field, and enjoyed a Saturday Night in America, with me. 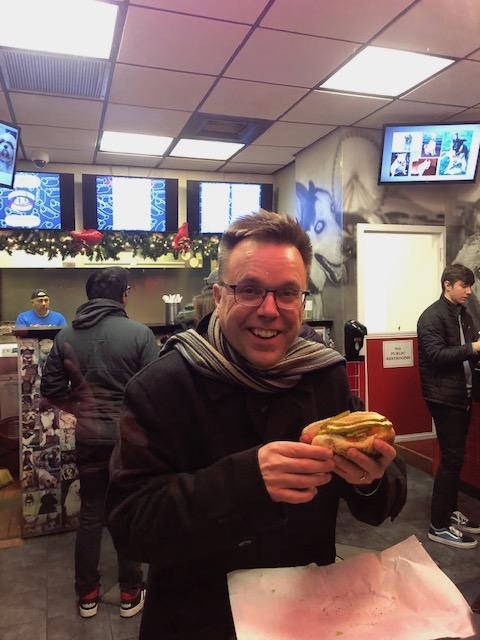 In the car home from that, I thought about how much I've learned from my visits and phone calls with Brian—and how I've gone about learning it. I learned to …

1. Tell your colleagues the truth about you, and tell them the truth about them. Brian taught me this one first. He's shared a lot of things that I wouldn't have told him, especially in the beginning. I appreciated that, and as soon as my confidence in the PSA began to grow, I was inspired to open my kimono, too.

Meanwhile, Brian has told me straight up that he thinks I do some things absolutely wrong with my World Conference—emceeing it myself, for one example. How can I connect with all the speechwriters I've gathered if I'm always worried about keeping the sessions on time and delivering my next set of remarks? I see his point. Believe me, I see his point. But meanwhile, I can't imagine ceding control of the tone of the event, as he does, to another moderator. (And of course, when I share this sweaty dilemma with people who attend both of our events, they shrug apathetically; there's more than one way to skin a cat.)

2. Keep what's between you between you. I've never told Brian, "This is just between us," because I've never had to. Our lot in life is unique to say the very least, and the observations we make in our two-person treehouse are generally better kept to each other. You should be equally circumspect with the info you get from your colleagues.

3. Even in the tiny world of speechwriting, assume there's more than enough to go around for everyone: enough jobs, enough customers, enough good ideas, enough compelling conference speakers. As long as you're doing something that's needed and you're doing it well, your "competition" is really just another option you're glad your customers have.

4. When you've learned from each other, tell each other. It was a conference that I organized that inspired to Brian to return to the U.K. to start holding his. By the time I attended the first one of those, he'd figured out some things that I hadn't. For instance, sessions didn't have to be an hour long, one after the other; his sessions are often 20 minutes only—so that if one session sucks, how loudly can people complain? Those short sessions—and his attitude, which he himself sometimes describes as "relaxed"—also allow for some playful (and not immediately useful) curriculum, which my Puritan-American self embraces a little tiny bit more every year.

5. You don't have to agree on everything, but you can still form a mutual understanding and develop shared taste. Brian and I aren't natural blood brothers—we're divided by a common language, and all that—but we still have belly laughs about mutual acquaintances and experiences only we have in common. (Perspectives, too. Brian will like this one, unless I've told it to him already: At the circus, a guy was following an elephant around and shoveling its dung into a wheelbarrow. Somebody in the audience shouted, "I say, Sir, surely you can find a better job than that!" The shoveler looked stunned. "What," he shouted back, "and leave show business!?")

More importantly, we've come to trust each other's judgment, and if I tell him someone has spoken at my conference who will be great at his, he'll reach out to that person almost for sure. And should you bomb at his conference, don't expect to be invited to mine.

We've known each other over time, and come to admire each other for always being there, and—as I mentioned to Brian the other night—making a more substantive difference in the world by "pissing in one spot."

Brian laughed, and said the phrase appears in his new commonplace book, A Christmas Stocking.

As I dropped him off at his hotel, we said how lucky we are to do work that our customers seem to appreciate.

We're lucky to have one another, too.

Maybe some year, we'll meet up with the woman who runs the Lighthouse Operators Guild, and have ourselves a time.