The week before the PSA World Conference at Georgetown, there was another major speaking event at Georgetown—a policy speech by Facebook CEO Mark Zuckerberg, essentially explaining why the company won't take down political ads even if they contain lies.

Finally, Zuckerberg had the chance, outside the constraints of Congressional testimony and the preening techno-ingoramus questioners, to speak his piece! And speak it he did. And did and did and did! Over 5,000 words and 45 minutes, he made some good points! Many dozens of them, in fact!

A rare celebrity CEO speaking on a topic that's very much in the news, acknowledging that his company makes a profound social impact, and defending that impact as essentially good. As far as corporate speeches go, this one really should have made a splash. But it barely made a sound.

I think that's because it wasn't really a speech—but rather, a spoken version of the world's longest op-ed. And because Mark Zuckerberg doesn't know the difference.

What is the difference? A speech is a specific human being revealing something to a specific audience.

"Georgetown" is not an audience. After reading several news reports on the speech, I have no idea why the speech was given at Georgetown, or who specifically—students? faculty? campus caterers?—rearranged their lives to sit still and listen to it. (Now, had Zuckerberg returned to Harvard to give a speech to the students at his own alma mater, and framed the speech as being given, in a sense, to his idealistic 21-year-old self, to whom his 35-year-old self must be accountable … that could have been more meaningful.)

Strike two: The speech doesn't reveal anything—not a new policy, not even a new analogy, and certainly not a kinder, fleshier Mark Zuckerberg.

Though it does try. Behold the blanched anecdote that begins the speech:

When I was in college, our country had just gone to war in Iraq. The mood on campus was disbelief. It felt like we were acting without hearing a lot of important perspectives. The toll on soldiers, families and our national psyche was severe, and most of us felt powerless to stop it. I remember feeling that if more people had a voice to share their experiences, maybe things would have gone differently. Those early years shaped my belief that giving everyone a voice empowers the powerless and pushes society to be better over time.

Back then, I was building an early version of Facebook for my community, and I got to see my beliefs play out at smaller scale. When students got to express who they were and what mattered to them, they organized more social events, started more businesses, and even challenged some established ways of doing things on campus. It taught me that while the world’s attention focuses on major events and institutions, the bigger story is that most progress in our lives comes from regular people having more of a voice.

Since then, I’ve focused on building services to do two things: give people voice, and bring people together. These two simple ideas—voice and inclusion—go hand in hand …

That story still has marks from the speechwriter dragging it out of him. "Well, I guess I did think it was bad that people didn't get to vote on whether to invade Iraq. Can you maybe do something with that? Great!"

In college as we all know, young Zuck invented Facebook to rate chicks, and the thing took off and he went with it. And now he's backfilling with an origin story that portrays him as a would-be war protester? (In college I set a footstool on fire outside my dorm and was charged with arson and nearly thrown out of Kent State University. I'm glad I've had some other formative experiences in the meantime, so I don't have to give speeches about how I've always tried to bring warmth and light into the world.)

The problem with Zuckerberg is that he's bloodless. Which is understandable—even inevitable. Like a pre-scandal Tiger Woods, he's been on one straight track for his whole young life and he just hasn't developed the character that the rest of us earned through our serendipitous misadventures on this mortal coil.

Take a sabbatical, Zuckerberg: Get high in Amsterdam, float down the Ganges, get arrested in Bangkok—do something other than running a tech company, which hasn't been good for either your credibility or your complexion. 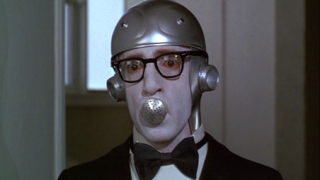 Until then, put a cork in it, Zuckerberg, and stick to op-eds. They're shorter, anyway.