What I'm about to say is probably naive in some ways and impractical in others and may come across as a bit overwrought in general—but I'm not going hold back from telling everyone who helps corporate leaders communicate:

If you are not feverishly working on a memo or a crafting an executive presentation or researching an internal position paper on the subject of how your leader describes your company's position in society, then you are one of the less effective Seven Dwarves: Sleepy, Bashful or Dopey.

Now, don't be Grumpy: I'm only telling you, you are not ever going to receive an invitation more ornately engraved than this.

Last month—during the quiet, philosophizing-friendly month of August, the Business Roundtable redefined the purpose of the corporation, and your CEO and/or most of her or his peers signed the damned thing. A corporation, instead of serving only shareholders, now must promote "an economy that serves all Americans."

What does that mean, exactly? Well, it'll be the CEOs who defines what it means. And who writes the words that the CEOs say?

But speechwriters take vacations in August, too. And who wants to write about thought leadership by the lake? And then Labor Day came and then school started and everybody hit the ground running in September and nobody was thinking philosophically anymore, because earnings were coming up. (Earnings are always coming up!)

But then in the very last week of September, a bunch of CEOs got sacked or resigned, and The New 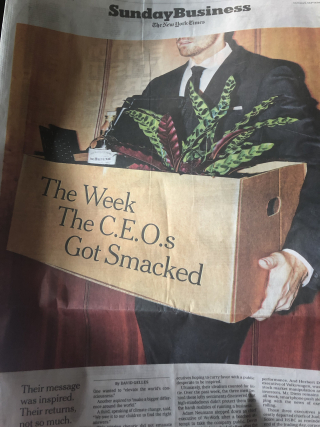 York Times Sunday business section has a fine cover feature titled, "The Week the CEOs Got Smacked," which blames the bloodbath, essentially, on badly calibrated communication. Specifically, the sacked CEOs were positioned too far the direction the Business Roundtable suggests, and too far removed from the bottom line. CEOs are getting canned from companies that have lofty mission statements but uninspiring balance sheets.

"Today, as the stock market wobbles and steeply valued start-ups face discerning public investors for the first time, not every company with an inspirational story is standing up to scrutiny," the Times reported, quoting New York University marketing professor Scott Galloway, “People’s radar for yoga babble is on high alert right now."

As I wrote two years ago, companies are increasingly looked to to weigh in on cultural issues, because CEOs are now seen as the only adults in the room, more moored than our current political leaders to public consensus and global standards. "Trump can pull out of Paris," one communicator put it, "but UPS can't."

And yet corporations can't afford to weigh in on everything. From The Times:

Indra Nooyi, the former chief executive of PepsiCo, said she was willing to engage in third-rail debates only if they were relevant to the company’s broader mission. “Not all companies need to speak up about everything,” she said. “If the lofty rhetoric is not linked inextricably to the core business, you should question it.”

Somebody in every company needs to think hard and tough and write loud and clear about firm's real, sustainable, honest-to-goodness economic, political and social impact in this world, and build an articulate and aggressive executive leadership communication effort around that immediately.

And if that somebody isn't you, Mr. Speechwriter or Ms. Executive Communication Director, it's either going to be someone in marketing, or no one at all. Or worst of all, someone at the fucking ad agency.

Writing a memo that redefines the corporate mission: Yes, I realize it's not as simple as that.

But it is as simple as this: I've been watching corporate communications for more than a quarter of a century, and over those years I've listened to thousands of speechwriters and other executive communicators complain justifiably about how they can't get the ear of the CEO, who can always think of so many more important things to do than talk to you about how to articulate the corporate mission.

Hard to imagine a CEO who wouldn't read some smart thoughts from you (and maybe a few other communication and marketing colleagues).