"I'm just a dumb writer," my adman dad used to say, with genuine humility that was rare for him.

I've always been just a dumb writer, too. Then about three and a half years ago, I swallowed very hard and bought a publishing and training company, and became a business guy.

I was so tense around that time that my then 11-year-old daughter asked me what was the matter, and then answered her own question. "I think I know," she said. "You're afraid you're going to screw everything up."

I'm not rich yet, but I've had three really rewarding years, I'm almost out of debt, and though I may have screwed some things up, I sure haven't screwed everything up. (Also, I've been wonderfully lucky in several of ways that I'm aware of, and probably just as many ways that I'm not.)

Anyway, a little more than a week before the big annual conference we host—when I feel my very happiest and most secure about everything, because my customers are right in front of me, clearly enjoying the hell out of themselves—I thought I'd "give back," as we capitalists say, by sharing a few things I've learned, in case there are other dumb writers out there thinking about starting a business, and wondering what they don't know:

Get ready to fuck some stuff up. As a writer with writer parents and writer friends, I knew the editorial business, and I knew myself in relation to it—knew how to react to good and bad editors, good and bad pay, good and bad reactions to my work. As a business owner, I know some aspects of the business, and am an ice cream-cone-on-his-forehead-and-licking imbecile in others. It's like going from star quarterback to player/coach/general manager. You're going to do your best, you're going to surround yourself with good teammates who tell you when you're being an idiot, and you're still going to blow some stuff. For instance, if you're trying to grow your business …

Go where people know you. You think people buy stuff from you because you're handsome and charming. But the homely truth is, you're neither that handsome nor that charming. People buy stuff from you because they know you and have come to like you because you know their business and you always show up and you always come through and you're useful. If you want to grow your business, you're better off deepening your relationship with your friends—or getting them to tell their friends about you—than waltzing shiny-shoed into some world where they've been doing fine without you since Lincoln was alderman.

Related: People probably won't steal your latest big idea. Why? Because your idea probably blows. And even if it's good—if it can be taken from you and executed by another person, then it probably isn't sufficiently of you to carry the day in a world that, again, has been getting along perfectly well without it since time began. And besides: Stealing an idea also requires executing the idea, which takes absolute assloads of work. Most people have jobs, and no time to execute a new idea, stolen or otherwise. And the unemployed are not typically intellectual property thieves either. So stop whipping out NDAs in the J&M Tavern or at the breakfast buffet at the Hampton Inn, Steve Jobs.

(Also related: People who you're paying to execute your big idea will tell you it's a good idea, whether it is or not. They definitely think it's a good idea, because as far as they're concerned, it is a good idea, because it's getting them paid! Pay someone to help you start a professional basketfoot team in Muncie, Indiana, and they'll become so excited about the idea. And you won't blame them, because you know goddamn well you've earned money on that basis yourself.)

Simmer down in general. When you start a business, every day feels like an Italian opera—which you and your colleagues have to find a way to embrace, the way you would any other adventure (like a writer does!). But don't get hooked on adrenaline. Eventually, routines and procedures and business patterns develop. And if you still need every day to be a crisis and every negotiation to be a drama and every competitor to be a baby-eating dingo, then you should go work in the Trump White House, not try to run a company of employees who want stability and sanity, vendors who want to make a profit too and competitors who can become strategic collaborators if you take the emotion out of it and focus on the customer, who may need you both.

Running a company brings happinesses your dumb writer brain never anticipated. When I was a freelance writer, I used to love not being accountable to anyone for when and how I did my work, because I was free! Now, I find I actually enjoy being hourly and geographically accountable to our COO and other close partners and colleagues, and feel a sense of daily connection and team accomplishment that I didn't know I was missing. Also, I have less anxiety than I used to; I spend far fewer nights staring at the ceiling now than I did when my clients could end my livelihood with one Monday morning voice mail. I feel like I'm building something—something that keeps building itself, because it wants to grow. Also, I can occasionally write off a steak dinner. And now that I play far less golf, I enjoy it far more.

Terrible things might befall you if you start a business, but it won't be the things you're worried about. Here's what I was worried about three and a half years ago, as I recorded it in this space:

Writing Boots will always be about writing. (Unless it takes a surprising turn and focuses strictly on boots.) But since I'm now a business owner, and my days are as much filled with business stuff as with writing, I bet I'll reflect here occasionally about that trip.

My daughter said gently the other day that she's tired of hearing me tell "everyone we talk to" that I bought this magazine called Vital Speeches of the Day. That night, it was a bunch of chummy soccer parents who I hadn't seen since fall. I told her I'm telling them not to brag about it, though that's surely part of the reason. But mainly, I'm telling them in order to notify them that something real in my life has changed—something significant enough to change me. If we'd had a baby over the winter, I'd tell them that. If we'd moved to the suburbs, I'd tell them that. If I'd had one continuous panic attack since about November—well, that kind of is what I'm telling them.

And as a writer, I feel almost like I'm announcing a sex change. A writer, no matter what his or her politics, is by nature a watcher, an analyst, a dramatist. A business owner must watch, too—but the next move isn't articulation. It's action. That's how businesspeople express themselves: Not through words, though action. (We know this, yet we wonder why their speechwriters have such a hard time getting them to sit down and discuss what they want to say in the speech.)

"Everything's going to change," my entrepreneur pal Tom Gillespie warned me and promised me as he congratulated me for having done what he encouraged me to do—he and a number of other entrepreneurs in my life, who clearly wanted Mister Smarty the Grasshopper to know what it's really like to be in the middle of the cash flow without a paddle.

Well everything can't change, I told Tom. Even though I'm now the publisher of Vital Speeches, people will still show up looking for what they got from me when I was just its editor—back before I spent so much of so many of my days at the UPS Store, at the bank, on the phone listening and cajoling, on email pitching and interpreting, lying awake in my bed trying to figure out what Authorize.net does. 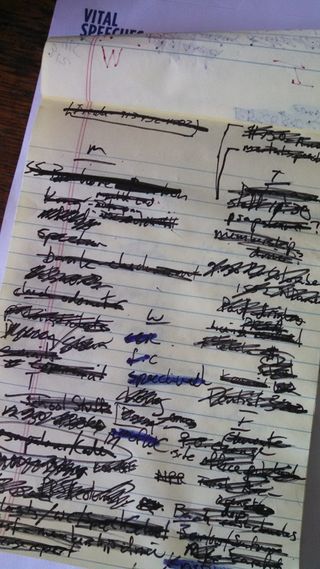 I must learn to integrate my well developed writing mind with my business mind, such as it is. One way I do this is to cultivate a habit of stepping out of myself and see the business stuff as a drama to be remembered and recounted. I tell my colleagues about this documentary I'm always filming and producing in my head, about the early days of this business.

The documentary sees me in Chicago's Central Post Office haplessly refereeing an argument on my cell phone's speaker phone between the cornfed, sweet-mouthed printer's representative Cathy in Northern Wisconsin and the hilariously truculent Sharon, who has been working in the USPS Periodicals Department for 34 goddamn years and has never been wrong about the postage rules yet! (She was wrong this time, as I found out on a subsequent visit, from her colleague Wanda. But I never told the printer, because I liked Sharon's attitude.)

The documentary records me calling people "motherfuckers" a lot, catches me thanking people profusely in advance for favors they have not yet promised to do for me, sees me squinting at spreadsheets, and zooms in like a National Geographic telephoto lens showing my eyes glazing over like a polar sea.

And you hear the disbelieving pause on the phone as our COO absorbs my offhand mention that, in response to a request for proof of residency by an important prospective vendor, I faxed over an unpaid speeding ticket.

I could go on. I will go on, I hope. Because to the extent that I can describe my life as a publisher as thoroughly and joyfully as I've described my life as a writer, I'll still be a writer.

I'm still a writer. And after three and a half years of being a publisher, the two things don't seem so separate. In fact, they seem like me.

Postscript: This is what my weekly list looks like now (you'll note the only task not completed is tennis). 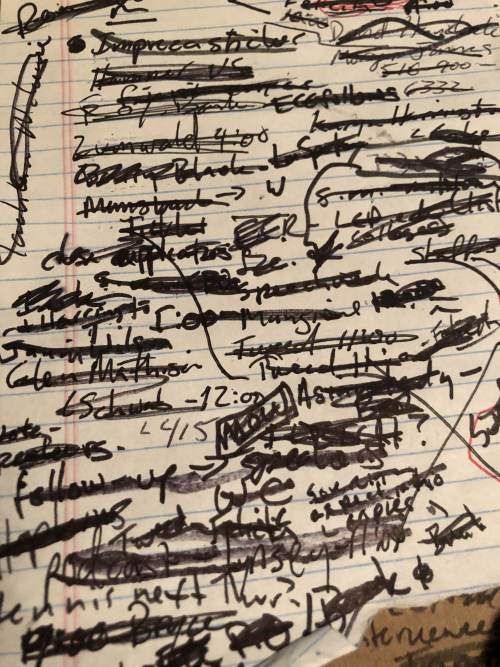