A wizened speechwriter and rhetoric observer asked me if I’d seen Greta Thunberg’s speech this week. “It’s passionate,” he said. “And brave. Really brave. But not rhetorically that interesting, I don’t think.”

Most of the speeches I see arrive here at Vital Speeches dead on the page. They look like Greta’s speech looks. And I react to them sort of the way I react in itals, to her text:

This is all wrong. I shouldn’t be up here. I should be back in school on the other side of the ocean. Yet you all come to us young people for hope. How dare you?

This is a good opening—straight to the point. I’m not a huge fan of “how dare you?” (or “shame on you”) because it shouts moral indignation, which doesn’t usually lead to communication. As my speechwriter friend Mike Long says, “No one ever won an argument by beginning, ‘Hey stupid.'” But maybe after getting attention, she’ll modulate the tone a bit.

You have stolen my dreams and my childhood with your empty words, and yet I’m one of the lucky ones. People are suffering, people are dying. Entire ecosystems are collapsing. We are in the beginning of a mass extinction and all you can talk about is money and fairytales of eternal economic growth. How dare you?

Again with “How dare you?” And wasn’t it unleavened language like this for which some of us mocked President American Carnage? And who exactly is the you she’s referring to? Is it UN officials sitting in front of her? Is it world leaders? Is it the CEO of General Motors? Is it people like me, who believe the prevailing climate science but pollute the skies over the Atlantic to give speeches about speeches in Africa? Is it climate activists who are not activist enough? Based on the fact that the crowd in front of her was clapping as she tore into “us,” I’m not sure we know who we are.

For more than 30 years, the science has been crystal clear. How dare you continue to look away and come here saying that you’re doing enough when the politics and solutions needed are still nowhere in sight? You say you hear us and that you understand the urgency, but no matter how sad and angry I am, I do not want to believe that. Because if you really understood the situation and still kept on failing to act, then you would be evil and that I refuse to believe.

So after two paragraphs of accusing us of willful badness—how dare we?—Thunberg now suggests that it must be that we simply don’t understand the problem. And now she’s going to fill us in …

The popular idea of cutting our emissions in half in ten years only gives us a 50 percent chance of staying below 1.5 degrees and the risk of setting up irreversible chain reactions beyond human control. Fifty percent may be acceptable to you, but those numbers do not include tipping points most feedback loops, additional warming hidden by toxic air pollution, or the aspects of equity and climate justice.

They also rely on my generation sucking hundreds of billions of tons of your CO2 out of the air with technologies that barely exist. So a 50 percent risk is simply not acceptable to us. We who have to live with the consequences. To have a 67 percent chance of staying below the 1.5 degree of temperature rise, the best odds given by the IPCC, the world had 420 gigatons of CO2 left to emit back on January 1, 2018.

… with some jargon many of us have never heard (feedback loops?) and gigatons of numbers we can’t comprehend. I would laugh at a CEO who larded a speech with stats like this.

Today that figure is already down to less than 350 gigatons. How dare you pretend that this can be solved with just business as usual and some technical solutions? With today’s emissions levels, that remaining CO2 that entire budget will be gone is less than 8 and a half years. There will not be any solutions or plans presented in line with these figures here today because these numbers are too uncomfortable and you are still not mature enough to tell it like it is.

You are failing us, but young people are starting to understand your betrayal. The eyes of all future generations are upon you. And if you choose to fail us, I say we will never forgive you. We will not let you get away with this, right here, right now, is where we draw the line. The world is waking up, and change is coming whether you like it or not.

This is not careful writing. It is not well organized, and not constructed to move anyone who doesn’t already agree with its premise. It is neither pleasing to the ear nor strategically jarring. It’s just sort of spewing. If this speech was submitted to me by an anonymous environmental activist, I would not publish it in Vital Speeches.

However—it was not submitted to me by an anonymous activist. It was sent to me by the whole world. It was delivered at the United Nations, by someone who has had the world’s attention for a year. And it was delivered through tears, by a person whose whole powerful, fierce, soulful being appeared to be behind it.

So that’s why I am indeed publishing it in Vital Speeches, and that’s why I found myself showing it to my daughter at 11:00 at night, and surreptitiously wiping tears from behind my glasses. 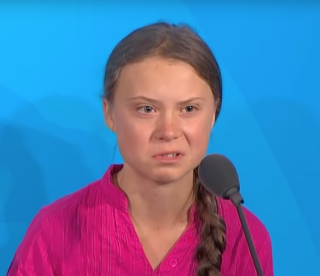 And because rhetoric isn’t just words.

It’s the humanity of the people who speak them.

And Greta Thunberg, despite what the world’s truest creeps are saying about her, has plenty of that.