Reviewing 11 years of Writing Boots posts to compile my new book An Effort to Understand—which you should pre-order immediately because if you like the standard fare here, you're going to love the best stuff—I naturally ran across some interesting pieces that didn't fit the theme. Or that seemed impossibly, poignantly dated. Like this heartfelt effort, from early 2011. —DM

I'm forever fielding assaults from my left—and sometimes from myself—saying President Obama is a "pussy," a "wimp," a "coward" or a "bad negotiator." On healthcare, on gays in the military, on taxes for the rich. 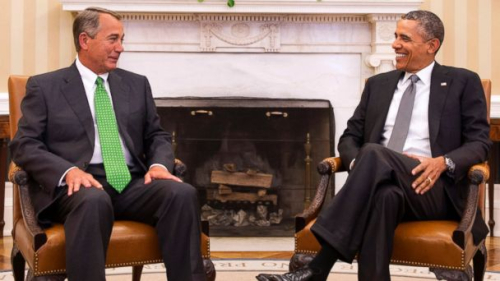 What am I defending? I'm starting to think it's his negotiating style more than his policies.

My old pal Tommy is a contractor, and a tough negotiator, no doubt about it. I love to listen to him chew people up on the phone. When he haggles, he starts hundreds or thousands of dollars lower than I would have dared. And he does things like, if he sees a clause in the contract he didn't agree to, just crosses the clause out, signs the thing and faxes it back. It's impressive. He's a good businessman, and he's made a lot of money.

He's seen me negotiate, too. And when it's all over, he calls me a "dumbass."

Which stings, I won't kid you. And I used to concede the point. But now I'm not so sure I do.

Here's how I go about getting what I need: I very carefully figure out what I think the job is worth—what it's worth to me, to the employer and to the market. Usually those are three different numbers, and compromising must be done. But I do most of the compromising, in my head.

So when it comes time to tell the employer what I will and won't work for, I present the number that I really believe makes sense—not an outrageous first roundhouse that will inevitably be answered angrily by a hard left hook, and then counter-offered back and forth until both sides, like punch-drunk boxers, are left to hold each other up in the center of the ring.

When I do this my way, over the long haul (and I keep clients over long hauls) the client comes to understand that my initial offer isn't very far from my bottom line. So the counteroffers, if they come, don't come in too low.

I've made a pretty good living as a freelance writer over the last dozen years, in some pretty tough general economic times and the journalism-business equivalent of the Great Depression. Though I've certainly left some money on the table, especially on short-term gigs where I might have gouged some clients (a couple of whom probably deserved it)—I think I've gotten a fair amount for my skills and the energy I've given, and I simply don't believe a better negotiating style would have significantly improved my income.

Why do I negotate in this polite and rational manner? My shrink might have another theory, but here's mine:

I don't like seeming unreasonable in negotiations with people who need me to be reasonable once they hire me.

I think that's more or less Obama's theory, too. I'm not sure it's always the right theory—there's a chance that both of us behave the way we do because we're adult children of alcoholics, or something—but I do appreciate how he goes about it.

If he's afraid of something, it's not Republicans: It's being seen by others as unfair, or insane.

Maybe I'm not defending Obama, as much as I'm defending myself.

Maybe I should stop.

Postscript, August 2019: While the above Obama frame might be cobwebby, I'm pleased at how well my negotiation style has withstood more than three years of owning my own publishing and training company. Colleagues, partners, vendors—the ones we started with are pretty much all still with us, and closer and more trusting and loyal for the mutually profitable work we've all done together. Which is, of course, of inestimable value—monetary, practical and even spiritual.