The week before the first moon landing in the summer of 1969, my adman dad wrote some copy for a client, Apollo 11-contractor North American Rockwell, that wound up being read into the Congressional Record after the mission was complete.

“America is about to put men on the moon,” the headline said. “Please read this before they go.”

The un-illustrated text above the North American Rockwell logo read:

Perhaps the best way for anyone to try to understand the size of such an undertaking is not for us to list the thousands of problems that had to be overcome, but for you to simply go out in your backyard some night, look up, and try to imagine how you’d begin, if it were up to you.

But our reason here is not to talk about the technicalities of the Apollo project. Rather, it is simply to ask you to think, for at least one brief moment, about the men and women who have applied their heads and their hearts and their hands—and a good many years of their lives—to putting a man on the moon.

Many of these people have worked for less money than they could have made in other places, and it is safe to say they have worked through more nights and weekends and lunch and dinner hours than they would anywhere else.

And the astronauts, these brave men who will fly again down that long, dark and dustless corridor of space, this time to set foot—to walk upon the surface of the moon—they know the price that’s often paid in setting out for lands uncharted. They know the price their fathers’ grandfathers paid just to walk across the wilderness of America for the first fifty years.

We ask you, in the days ahead as we wait for the big one to begin, to understand this fantastic feat for what it is and to put it in proper perspective, a triumph of man, of individuals, of truly great human beings. For our touchdown on the moon will not be the product of magic, but the gift of men.

In James A. Michener’s novel, “The Bridges at Toko-Ri,” an American admiral stands on the deck of his carrier early one morning and ponders the subject of his brave men. And thinking to himself, he asks a question of the wind which we believe all of us should ask as we think of the men who will finally make it to the moon and of the men who got them there: “Why is America lucky enough to have such men? … Where did we get such men?” 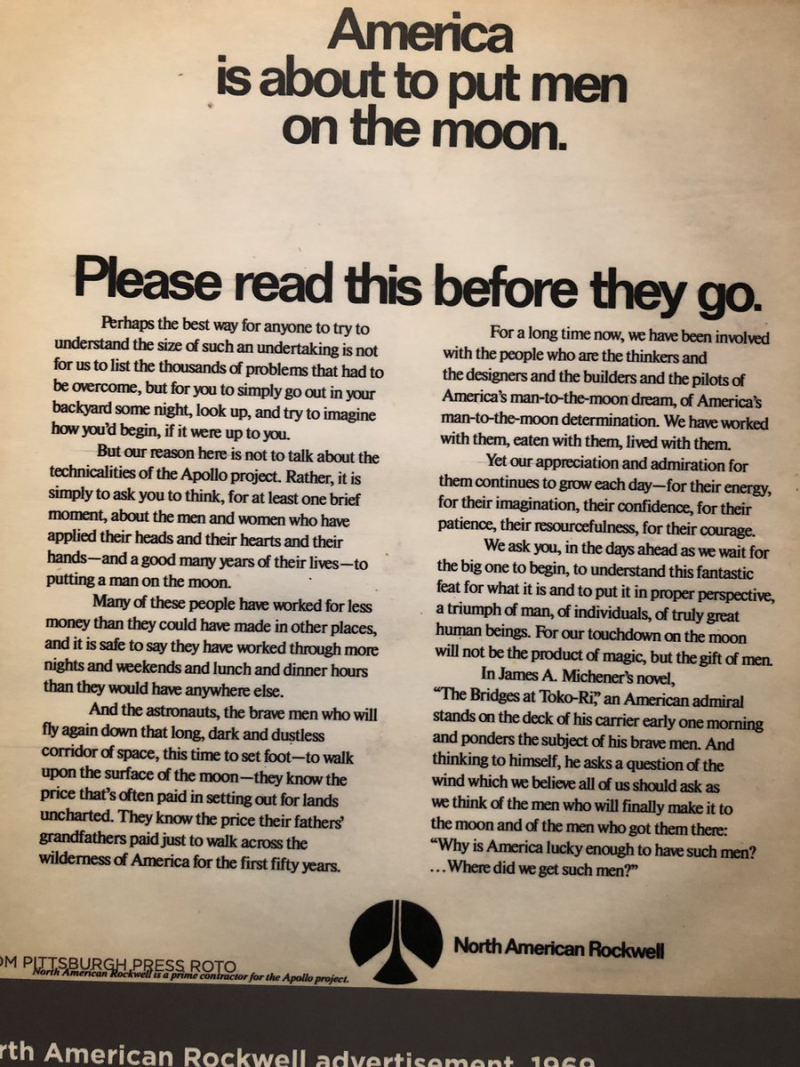 “It isn’t very often that an ad is so well written that it strikes a responsive note in the hearts and minds of many people,” wrote Campbell-Ewald’s president Hugh Redhead in a memo dated July 19, 1969. “Tom Murray, our creative director, has written one of those ads. We should all be proud of him.”

An advertising exec at another firm called it “one of the most fantastic, pure copy masterpieces I have ever read.” A housewife said the ad “made me feel I was participating in the Flight to the Moon.” And former president Lyndon Johnson wrote to say, “My pride in our nation’s space program and in all the dedicated people that make it possible is boundless. I was grateful to read those fine words about them.”

Moonshots, we should remember, need writers, too.