These days, you can't please everybody. In fact, you can't even pretend to.

But it's still important to know who you seriously don't want to piss off.

Exactly 10 years ago this season, I found myself working in a freelance capacity for Notre Dame University, which had invited the shiny new President Barack Obama to give the 2009 commencement address—and received a shitstorm in return, from conservative alums, anti-abortion groups and others who believed Obama was a hornless, tail-tucked Satan.

It was my job to rise at the crack of dawn each morning and compile a media briefing to help ND's president, Father John Jenkins (and his communication staff) to assess the nature and severity of said shitstorm. Every day, I asked and answered for the university brass, "In general, is the tone moving for us or against us? Is the volume of stories rising or falling? What is the news that is driving these stories? What's being done by those who want to escalate this issue? What should today's news lead us to look for tomorrow?"

At the end of the process, I summed up what Notre Dame had learned: "In the controversy surrounding this year’s commencement ceremony, Notre Dame received immediate and prolonged exposure to every imaginable environmental force. Right now ND’s board, administration, faculty and staff must understand better than their counterparts at other universities that there no longer exists such a thing as privacy, seclusion or protection from powerful groups with cross-agendas, or from the media and blogosphere that give them voice."

So I chuckled when I saw the quote in the news release about the speaker for this year's Notre Dame commencement address.

“Peggy Noonan is universally admired for the stirring prose, keen insight and the moral perspective of her commentary on America and the world,” University President Fr. John Jenkins said in a University press release. “I look forward to welcoming her to Notre Dame and hearing her address to our graduates.” 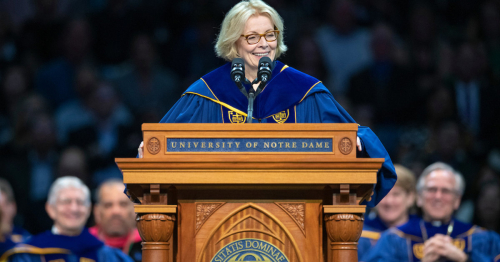 And Noonan gave her speech Sunday, and said:

To me, and at its best, conservatism, which of course is one of America’s two great political tendencies—conservatism is not a reaction, but a reminder from a wise old friend. … It is an attempt at wisdom, grounded in knowledge of human history and human nature. It lacks the shine of newness, but perhaps that’s because it has withstood the test of time. Its weathered look is testament to its enduring power. Edmund Burke spoke of an unseen compact between the living, the dead and the unborn. Margaret Thatcher was less poetic. She said the facts of life are conservative.

At Notre Dame, in any case.

Which is why the university's keynote speakers since Obama have included the likes of Mike Pence, Gen. Martin Dempsey and Cardinal Timothy Dolan.

Will the university ever again invite a speaker—even if it is a sitting U.S. president—who will roil its essentially conservative alumni base?

Not while Father Jenkins is in charge, is the way to bet.