Since my daughter Scout was six or seven, I've been known to the parents of whatever team she's on, for a catch phrase. When one of our players is approaching the opposing net promisingly, I shout at the top of my lungs,

It's syntactically annoying and if it leads to anything at all, it leads to our startled striker flinching and kicking the earth, or booting the ball over the net.

And then all the parents look at me funny, or studiously don't look at me at all.

I think it's a perverse, passive-aggressive parody of the inanities that all the other parents shout all game long, while (I think) I'm relatively quiet. 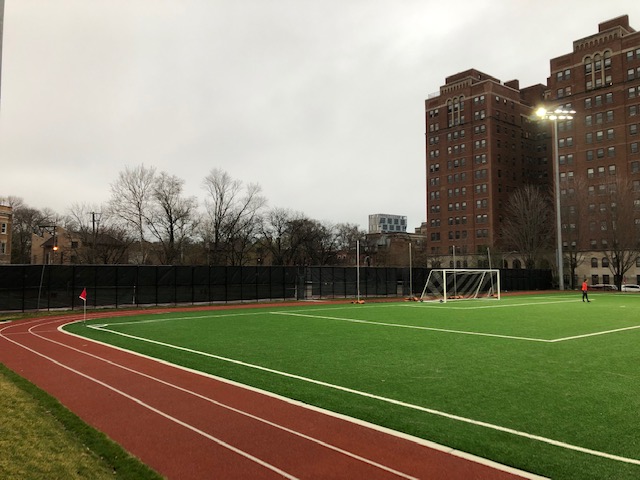 "Stay with it!" the mom yells, as if her daughter was maybe thinking about taking a smoke break.

"Keep going, girls!" (While the girls are keeping going.)

Not that there's no room for constructive sideline encouragement.

For instance, saying "good idea, girls" after a well-conceived but failed play is a good idea. Although, perversely again, I wish just once, a parent would call a spade a spade: "Bad idea, Kylie!" "Back to the drawing board, Bree!" (I do remember one dad, an Irishman, who would loudly point out an opposing defender and tell everyone, "Attack number eleven, girls! She's their weak link!" She was seven.)

Yelling "good hustle," or "way to fight"—as the girls are gathering themselves after some frenzied action—this seems like positive encouragement, and a healthy chance for parents to constructively relieve the 1,000 PSI of athletic advice that seems always to throb inside their chest cavities.

Another socially useful reason to shout encouragement is to give other parents the impression that you're interested in all the daughters, and not just your own. "Wow, great pass, Sienna!" (Oh god, is that Sienna, or is it Skyler?)

But most of what comes from the soccer sideline is:

• Loud, misguided and contradictory advising of the players to "push up," while their coach on the other sideline is yelling at them to "get back."

• Arguments about what offsides is, and whether Meagan was.

• And constant carping on a scale from muttering to shouting, about how the refs are all against us. I know this for a fact: In the history of youth soccer, spanning, 3,098,763,210,385 games, no parent has ever remarked as she jammed her camping chair into its condom, "Gotta admit, most of the calls went in our favor today!"

To sum up: Soccer parents—America's happy elites, defined as such on account of they make enough money that they have an extra $10K/year to spend on travel soccer fees and nights at the Hampton Inn and a FastPass at Panera—are largely insufferable when they (we?) are on the soccer sideline.

I know one dad—generally, one of the most affable guys I've met on this decade-long travel-soccer journey—who watches the game from the very end of the sideline, far away from all this. He visits with the other parents only before the game, during halftime and afterwards. Nobody asks him why. I did once. He said, politely, that he was afraid that if he got with the other parents he would start yelling stupid things, too.

Many married parents temporarily separate on every soccer sideline, putting as many other parents as possible between them for the duration of every game. Nobody asks them why, either.

I paint too uniformly dark a picture.

Sometimes something funny will happen during the game—a big swing and a miss, or a ball rolling out into the street and being run over and popped by the 152 Addison bus—and we all have a good-natured laugh.

Even more often than that, a player does something wonderful—a great pass, a great save, a great goal, great hustle—that we all appreciate, celebrate and sincerely cheer.

And if you ask any of us sideline parents, we know that we'll soon look back on these sideline days nostalgically—with rose-colored glasses on, and earplugs in.