It's one thing to have government protecting reform-resistant corporations from regulation. We're used to that.

It's a little startling when the government is the laggard that corporations are dragging along.

Here at Vital Speeches of the Day, I received a speech last month that was delivered at CERA Week, by the United States Secretary of Energy, Rick Perry. 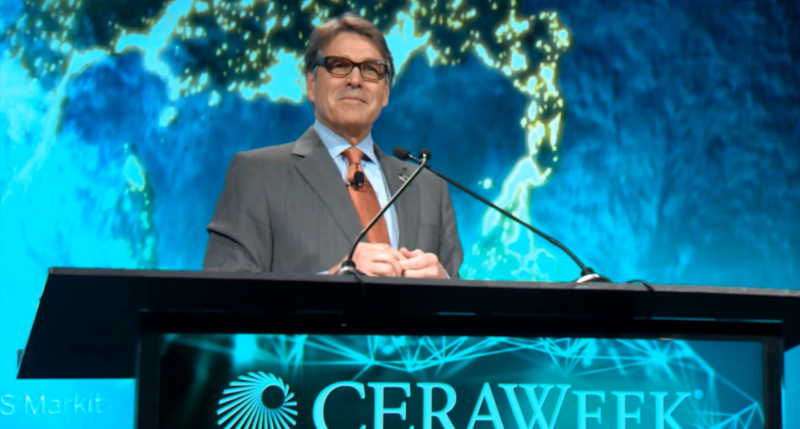 As an editor must learn to do, I cut the 1,400-word speech down to its money lines:

Thank you for that kind introduction.

I believe we must reaffirm innovation as the great engine of progress which offers wondrous choices and opportunities.

We are approaching the dawn of what I will call the New American Energy Era.

The signs of this new era are everywhere.

And that’s just the beginning.

For decades, some have claimed we are running out of resources like oil … and that even if we weren’t … we will destroy our environment if we keep producing them.

In response to these assertions … innovation has spoken … and refuted them completely.

We are not running out of energy … we are producing it more abundantly than ever … and more cleanly as well.

I am constantly amazed by the lack of discussion around the progress already being made.

This New American Energy Era will move forward … bringing unprecedented benefit to the world … unleashing greater innovation than ever … so that sovereign nations will share in the benefits of prosperity … freedom … and security … for this generation … and for generations to come.

That could have been delivered pretty much by any oil booster anytime in 86-year history of Vital Speeches of the Day. Any time that is, until now.

You know who's more progressive than the U.S. Energy Secretary on these issues these days? Everybody.

Including oil companies, whose CEOs are giving speeches with titles like, "We Have to Change … and That Is What Shell Is Going to Do."

"This means Shell will aim to bring down the net carbon footprint of our energy products by around half by 2050," said said CEO Ben van Beurden at last year's CERAWeek. "In other words, about 50% fewer greenhouse gases per unit of energy when used by our customers … and around 20% less by 2035. … Maybe that sounds like a lot of change … and it is. But change is opportunity too. And it is also the scale of the change needed across the world to meet the aims of Paris. That is the reality … and the reality is change."

Meanwhile, the U.S. Energy Secretary is perpetually reeling at the lack of discussion around the progress already being made.

With all of our running and all of our cunning, if we couldn't laugh we would all go insane.