a salesman is an it that stinks to please

but whether to please itself or someone else

makes no more difference than if it sells

There is a professional Silicon Valley salesman named Robert Scoble. I've been following him for years, like a responsible dog owner.

You don't know Scoble? Let me tell you about him.

He made his bones as the "Evangelism Strategist" for Microsoft 15 years ago, and has been working in similar professional-grinner capacities for increasingly foolish-sounding companies since then: Pod Tech, Mansueto Ventures and Futurist. Now he works as the Chief Strategy Officer for a company called Infinite Retina. They're into something called "spatial computing."

What Scoble does is, he goes to conferences wearing figurative and literal e-goggles and speaks sanguinely about the latest technology stuff so that his latest patron looks cool by association, in a world that has a peculiar definition of cool. And then he blogs and tweets about it. 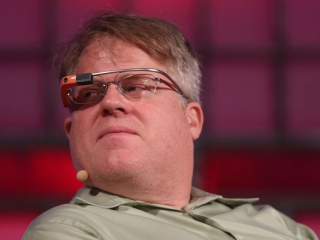 He used to do more than that at these conferences. His alcoholic womanizing—or was it womanizing alcoholism?—was exposed, socially arbitrated and baked into the cake like 15 minutes before the #metoo movement began. Phew!

Now sober and a self-congratulatory-stay-at-home-dad who pimps his autistic kid to flog spatial computing, Scoble blogs at Scobleizer, about things like "self-driving cars, AI, cryptocurrencies, digital assistants and XR," which he says will "deeply change the world." His semi-literacy and incoherence are made up for by his enthusiasm, to return to the dog comparison.

Why am I picking on Scoble? Because he has 412,000 Twitter followers, he's been pissing me off for more than a decade, and I haven't picked on him enough during that time. (And also because I'm borderline batshit crazy on the subject of technology, as you'll read in tomorrow's Writing Boots post.)

I went to a VR party at a game developers conference.

So what did I do? I had some amazing conversations but the one that made it all worth it was with a developer who is working for a trucking company.

Scoble continues, about the amazing developer who works for the trucking company:

He taught me all about the bleeding edge of supply chains. His firm is putting the finishing touches on an automated cold-storage warehouse. Robots do everything including loading the trucks.

Each load has sensors. He says they know an AC unit is failing before the trucker does and before it arrives at its destination.

I was telling my friend Carlos Calva about this while my Tesla drove home. He answered “what will humans do for jobs?”

Why make better video games, for sure.

We then talked about the chaos simulation engine that Unreal Engine showed off today where game designers can destroy buildings in real time using advanced physics engines.

Do you ever feel like you are living in the future?

Scoble went on. I won't, except to admit that I have a short fuse when it comes to heavy-breathers from Silicon Valley. And that I have a lot of anxiety about our gadget-encrusted present, let alone our virtual future. I think a lot of us feel this anxiety, but vaguely sense that the cultural consequences are the unavoidable collateral results of the best American qualities: scientific ingenuity and entrepreneurialism.

But no. There are full-time sharpers like Scoble involved, selling us this shit.

Such people do have to be watched, and occasionally reprimanded by homely humanists, who would prefer to load trucks for a living. 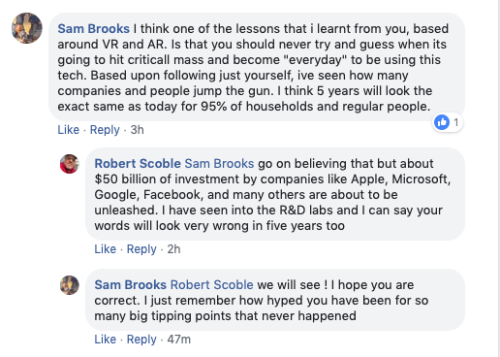