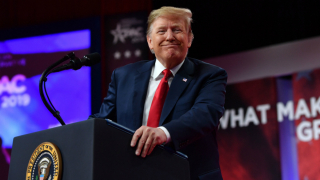 I suspect, would judge the speech as bad and rambling. To a former speechwriter, it was like watching a wound drain; it was like eating toothpaste canapés, it was like holding centipedes on your tongue; it was like hearing a ringtone of 'Macarena' during a funeral, and no one can find the phone…. the rhetorical spawn of Fidel Castro and George Wallace, combining demagoguery with bigotry in equal measure."

I disagree with Gerson, for two reasons:

One: Though Trump suffers from many deficits as a public speaker—discipline, clarity, credibility, taste and sanity come effortlessly to mind—he has undeniable strengths.

And it's easier to learn about rhetoric from leaders you despise than from leaders you love—as I explained to audiences last month in Australia and the Dominican Republic, who expressed sincere curiosity about Trump's appeal.

I told them I was in the hall at the Republican National Convention in Cleveland in 2016 and I heard people around me saying things like, "It's like he's talking straight to you!"

I told them what Chris Matthews once said about Trump, which is that he "listens with his tongue." That is, when he says something that resonates, he senses it instinctively and sticks to the theme.

And I told them that Trump's rally speeches, the transcripts of which are incomprehensible jumbles of non sequiturs and incomplete sentences, are actually oral thought puzzles that the audience members complete, together, in real time. The exercise keeps audiences engaged, because they're doing half the work. (What other leader could hold people's attention for two hours? Fidel Castro had his people at gunpoint. I love me some Barack Obama, but like most speakers, whenever he spoke for more than 20 minutes he was talking to himself.)

But Trump's jangled word jams do more than mesmerize. They actually corrupt.

Even if you despise Trump, you find yourself engaged in this work, which is required to make sense of what he is saying and why he is saying it—and which implicates you, even begins to psychologically co-opt you.

He says, "Mexico sends us some of the worst …"

You say you don't agree with Trump? You're completing his sentences!

It reminds me of riddle occasionally heard over shots and beers around here: "What are the three Chicago street names that rhyme with vagina?"

"Women love that joke!" a pal of mine always marvels.

It's not that they love it, I always remind him—it's that the joke makes them an accomplice. They can't quite condemn it, because they had a hand in writing it.

Which is exactly what Trump makes of every American who can manage to make sense of what he's saying. And that's most of us.

That's a pretty major gift for the "worst speaker in presidential history."

Two: Everyone knows that President Harding was the worst presidential communicator.

As H.L. Mencken wrote in 1921 (perhaps inspiring Gerson's litany): "[Harding] writes the worst English I have even encountered. It reminds me of a string of wet sponges; it reminds me of tattered washing on the line; it reminds me of stale bean soup, of college yells, of dogs barking idiotically through endless nights. It is so bad that a sort of grandeur creeps into it. It drags itself out of the dark abysm of pish, and crawls insanely up the topmost pinnacle of posh. It is rumble and bumble. It is flap and doodle. It is balder and dash."

Trump only aspires to such qualities.