Even on vacation this week, I did my dutiful dip into the business section in the Sunday New York Times to look for anything even halfway related to executive communication. There was a Q&A interview with Delta's CEO, Ed Bastian. 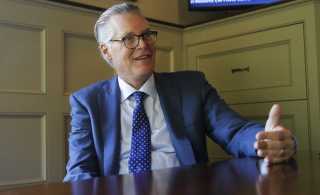 It was the usual CEO blather, so it didn't take me long to get to the last exchange, which is about why Delta canceled a discount for members of the National Rifle Association after the Parkland shooting.

Bastian is asked how he came up with a statement on the issue that read, in part, "Our values are not for sale."

And here's what Bastian says!

"I went to our communications team and asked them to draft a statement for me. What came back just wasn’t my words. So I threw it away and sat down and wrote it myself. And it was from my heart. It was more than a business decision for me. It got personal. You try to detach your personal emotions from your business, but there’s a point where you can’t anymore."

Why, you dirty Bastian!

If you feel strongly about a thing, write it yourself then run it by the communications team to see if they can make it better. (Which you probably did—and which they probably did, even in the nether-bus gloom.)

Secondly: Writing a 384-word statement all by your wittle self isn't a great enough accomplishment to justify slighting your communications team. Also, I don't know anyone on your communications team, but I like to think that one reason they didn't send you back "your words" is that your words aren't actually that great. "Our values aren't for sale" is a self-righteous and probably disingenuous cliché that your writers maybe couldn't bring their typing fingers to tap.

The rest of the statement isn't exactly a profile in courage. (BTW, Bastian, did you know that writer Ted Sorensen wrote Profiles in Courage for Senator Kennedy?) "We are not taking sides. Our objective in removing any implied affiliation with the NRA was to remove Delta from this debate."

If that's what your writing sounds like when it's from the heart, I'd hate to see your dispassionate stuff!

Look here, Bastian: I know it's frustrating that your corporate communications team can't instantly turn your every brain fart into compelling and comprehensive prose that strikes you as exactly what you'd-a said if you could-a laid tongue to it. But that's just sort of how communication is: It's a complicated process that involves frequent delays and inevitable disappointments.

But Bastian, your willingness to write your own material emboldens this writer to presume give you a little management advice: Your communication team will do a better job if you don't gratuitously shit on them in the newspaper.