"The descendants have arrived at home," was the typical amusingly stilted English translation of Jutatip's Facebook post the evening we arrived at her and my father-in-law Sherdian's home after 24 hours of travel—Chicago to Taipei, Taipei to Bangkok, and a five-hour van ride to the inland city of Korat.

Sherdian married Jutatip, who we call Duan, 11 years ago after meeting her in Thailand on a construction job he was overseeing, and they moved there a couple years ago and built themselves a house. Finally, they convinced our family, and also Cristie's sister Kirsten, her wife Jeni and their daughter Parker to trade a traditional holiday season for what might as well have been a trip to outer space.

I. Improvisation, and with Rules.

Jetlagged I guess, I was up at dawn on our first morning in Thailand.

Even before the sun came up, it was hard to read over the quiet cacophony of cicadas sawing their wings, roosters crowing, dogs barking, birds calling, motorbikes passing and a monk speaking over the loudspeaker at the temple in their village on the outskirts of town.

The morning light revealed the haze made by a neighboring farmer, burning the rice straw off his harvested rice paddy. 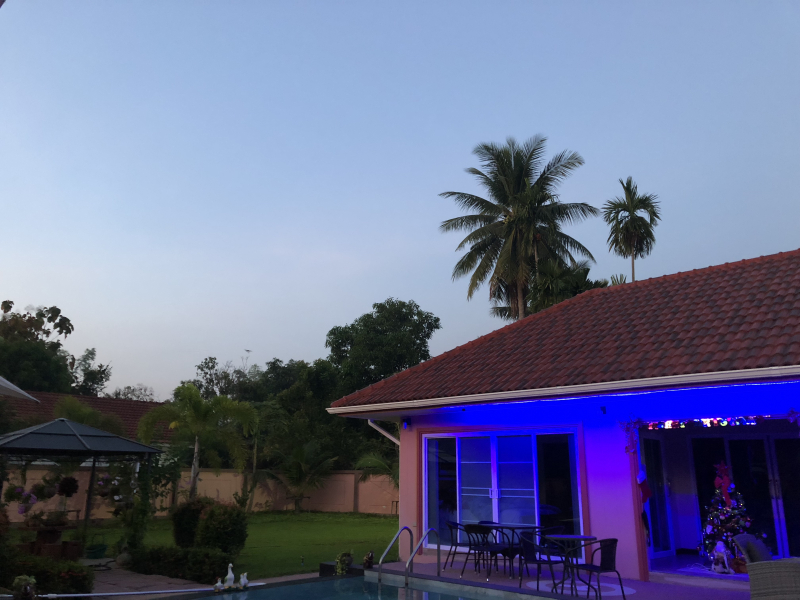 It sounded the way that it seems in Thailand: improvised and dangerous and absurd, yet safe and ordered and sensible, somehow.

On our 11-day ramble, from Korat to the beach city of Hua Hin and back to Bangkok, I saw motorcycles with sidecars with roofs over them roaring down the highway dangling hammocks holding sleeping children. (And a movable omelette kitchen, too.) 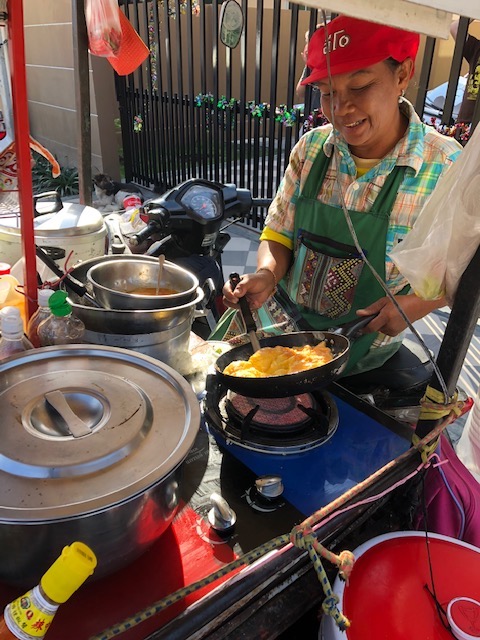 I partied with two professional jockeys—one recently retired, to become a structural engineer. (It was they who introduced me to the jarring reality that James Taylor’s version of “Handy Man” is a standard Thai party anthem. I would later hear it in restaurants and bars, in open-air markets, elevators, water taxis and cars. Sam I am, I do not like Handy Man.) 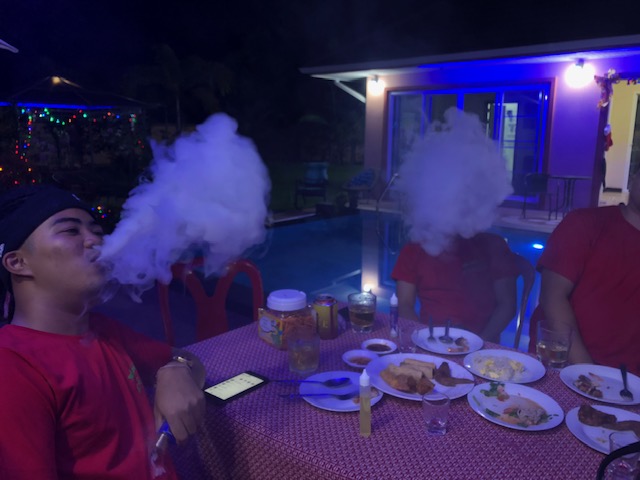 I met beautiful children of troubled parents, cared for utterly by resourceful combinations of grandparents, aunts, uncles, and young lesbians looking for babies to love.

I rode on an elephant through a vineyard like a colonialist, and an elephant picked my daughter up with his trunk like a twig. 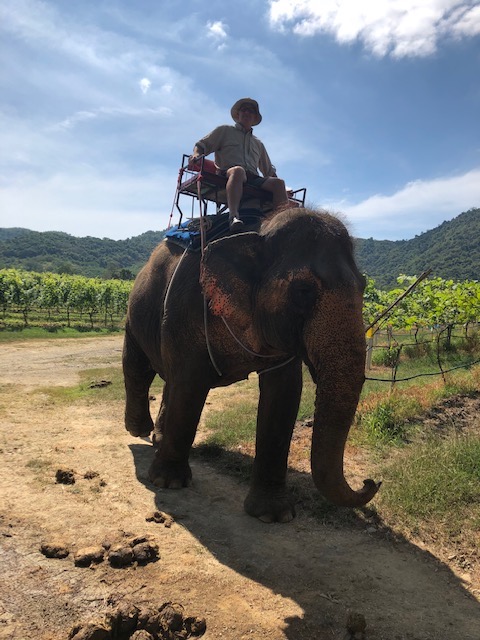 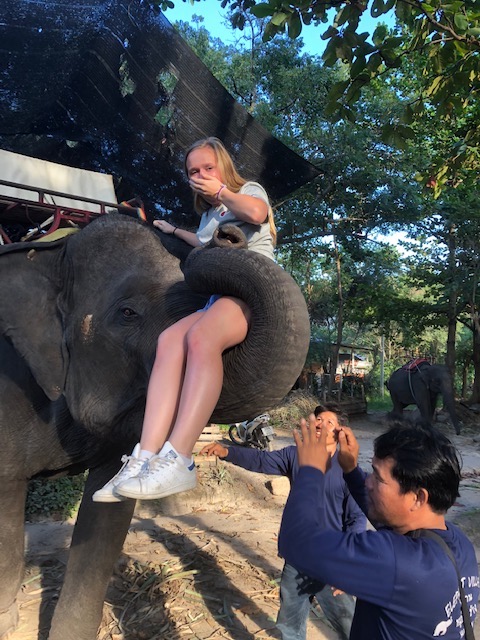 I saw men playing volleyball only with their feet and heads—and basketball, too.

I saw a monk calling his colleagues to prayer, his message reaching animals, who Buddhists regard as sentient and spiritual beings, after all.

And I watched Duan stoically guide a family of seven helpless and needy American babies on a fun and educational cross-country ramble that culminated in a city of eight million. Like toddlers, we staggered about with our mouths open at Duan's clear and quick thinking, her near-psychic sensitivity to each one of our needs, her ability to charm strangers into instant friends—and her willingness to get a little rough, with merchants like the man offering a boat tour on Bangkok’s Chao Phraya River:

He quoted a price for the tour—on a skinny “long tail boat,” powered by an outboard automobile engine—

Duan became mildly bellicose, later telling us she told the man, “This is my family!” Like a brainwashed Star Wars stormtrooper, the man instantly acquiesced, giving a significant discount.

Later on the same tour, down a canal that gave us a guilty gape at extreme poverty through the back door—

—a young man pulled alongside in a canoe and offered us refreshments. Before Duan could negotiate on our behalf, we all said yes and he began opening the Singha beer bottles and handing them to us. 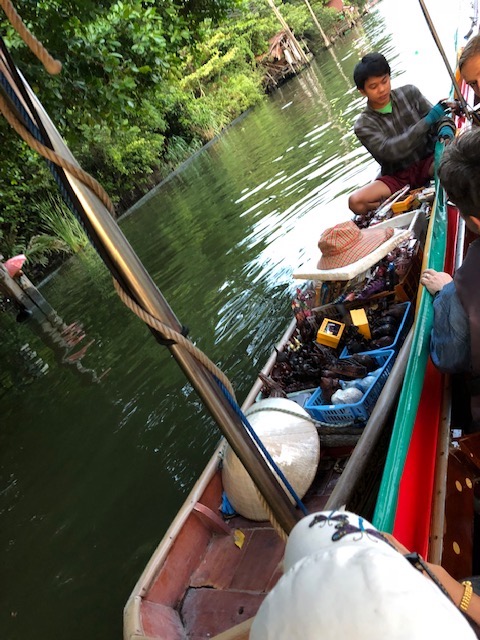 After he took our money and as he prepared to leave, he reached Duan near the stern—and she began to berate him over what he had charged us. To mollify her, the young man gave her a can of orange soda at no charge. She took it, and shook the ice water off the top and into the boy’s face. He received this treatment as if he knew he had it coming, because, as she later told us she told him, “This is my family! This is not right!”

And when I reminded her later that night that such interactions don’t happen in the West, she shrugged, perhaps out of subtle pity that I live in such a cold and impersonal society.

In Thailand, white people are called “farang,” and the dealings between white men and Thai women notoriously go beyond the normal bounds of tourism.

While the seediest thing I saw was a white golfer put his hand on the ass of his golf caddy, all of whom are female in Thailand— 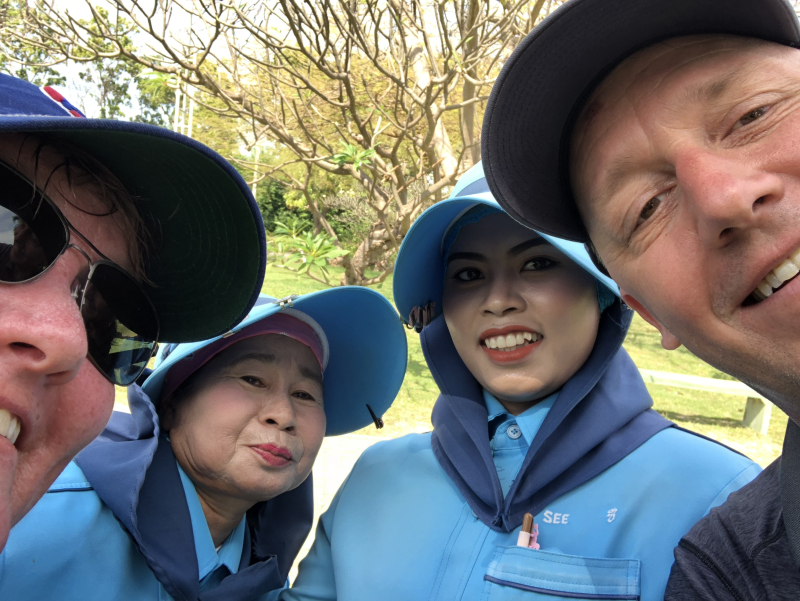 —even the marriages and other permanent expat arrangements are hard on the Western eye.

A bright and funny Dutch expat chugged the Singha beer less greedily than some banter with a fresh westerner, to whom he lamented that he his Thai wife were knowingly sending their daughter to an inferior college, in Bangkok.

An American who had voted for Trump from his Thailand home seemed unsure of the position he was defending, but unwilling to give any ground about the president. He was more compelling on the subject of his America-dwelling son, who he is proud of, and seems to miss terribly.

In most of the expats I met, I sensed the rueful feeling of self-exile. (Or is that just how I’d think I’d feel?) [Or, in this strange American moment, how I already do?]

But these marriages can also seem beautiful, the way it does with my father-in-law and Duan.

In the coastal town of Hua Hin, we ate with a Dutchman who had married a Thai teacher many years ago. He had since retired from his job as a journalist to sing popular tunes in bars, to the melody of his 12-string guitar. (Yes, he plays Handy Man, and did so, with my vocal help, in a hootenanny on New Year’s Eve.) He and his wife seemed as content as a long-married couple can.

As do my father-in-law and Duan. He has changed her life economically—and her family’s life, too. But he has been profoundly changed by her and her family. I pointed out to my niece Parker that she should learn from them, to not be afraid, for lack of a more appropriate line, to shower the people she loves with love.

III. Did Thailand Change Me, Too?

My wife Cristie is sort of an amateur Buddhist, which as far as I can tell is fine with Buddhists.

In Thailand—especially in our early days there—she seemed to go into sort of a Zen trance which upset our 15-year-old daughter Scout. Teenagers don’t like to see their cynical Chicago mother in reverent tears over a monk's gift of a Buddha statue. Teenagers are supposed to be the unpredictable ones, after all. I told Scout not to begrudge her inner-city schoolteacher mother a plane on which earthly, daily madness doesn’t matter.

Scout was less troubled by a transformation she saw in me. “I love Vacation Dad!” she shouted to me during an afternoon of body-surfing in the impossibly warm Gulf of Thailand waves off Hua Hin. “All the anxiety is gone, and you’re just, like, fun!” I later pointed out that she is more consistently fun to be around on vacation, too.

But vacation doesn’t take you where vacation in Thailand takes you. For instance, on a late-night frenzy in a hole-in-the-wall bar in Hua Hin, where Duan knows the owner, her Lady Boy daughter (click on that link for more on this simultaneously enlightened and backward gender-bending cultural quirk) and several other gender-ambiguous but party-positive people, glad for our arrival and the excuse to drink fast and sing loud.

When Handy Man came on, I serenaded everyone with that insipid and meaningless song with my whole heart, noting the strong smell of fish oil from the big wooden pestle that someone had given me as a microphone. When Country Road came on—another Thailand singalong standard—I captured the scene.

I’ll miss Duan and Sherdian. And I do hope I’ve brought back a little of this funny, nutty, lovely and generous land of yes, and. 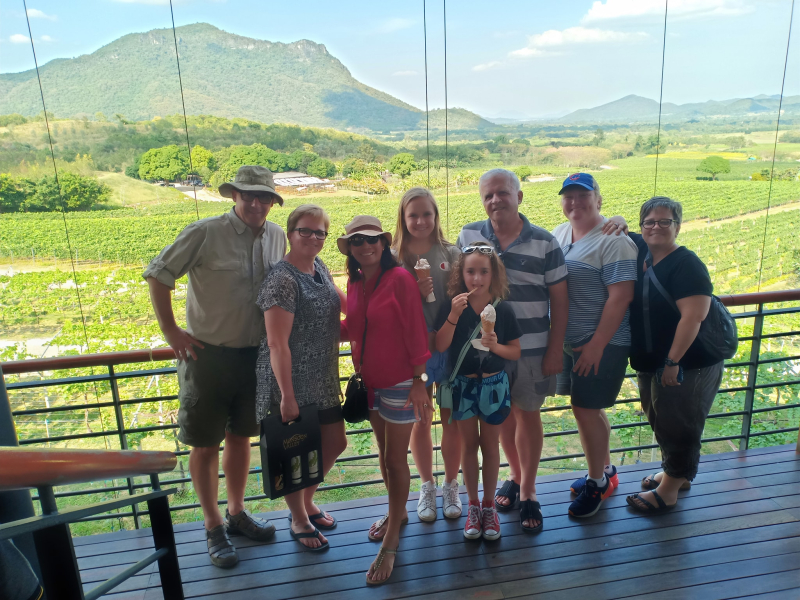