Yesterday's Dow Jones plunge, drowned out by the latest catastrophic hurricane and all the other discouraging shit we've witnessed on our TVs this fall took me back to the fall of 10 years ago—another dark time, when I was living in a pretty dark place: Middletown, Ohio, with my dying father. This piece ran in the Huffington Post on Oct. 25, 2008. —DM

Granted, the circumstances of my little election-year report on Ohio are extreme.

My 85-year-old father has been diagnosed with cancer of the pancreas, and for the last two weeks I’ve been here in Middletown, shepherding him through tests and oncology appointments. “Palliative” is the operative word, although I keep hoping that he’s got some good, cheerful, peaceful, philosophical time left. But Dad’s awfully depressed right now, and I’m trying hard not to “swallow his depression whole,” as my sister warns me against.

I’ve played golf a couple times and though I’m not really a jogger, I go for a daily run to escape the quiet of Dad’s condo, to throw off the constant downward pressure of decline. But outside, in this once great southern-Ohio steel community south of Dayton and north of Cincinnati, it’s just more of the same.

I realize the timing of my visit is bad. The first week I was here a windstorm inspired by Hurricane Ike blew out power all around the Cincinnati area. Power stayed off for most of Middletown’s 50,000 residents for half a week. The storm blew our mailbox away and shut down our phone for a while, but Dad and I never lost power, so we were able to listen to pundits argue about whether or not the U.S. financial system would collapse.

The Reds are 20 games out of first and the Bengals are the laughing stock of the NFL. “They’ve got so much talent, but they just can’t get it together,” lamented a bewildered golfer at Middletown’s Weatherwax golf course, the day before we watched them lose their third straight game to open the season.

I jogged around downtown Middletown, stomping grounds of my dad’s dad, who died before I was born. (And before people jogged. I’m always ready to explain to his ghost what I’m doing.) He was a community pillar in the 1920s and ‘30s and ‘40s and ‘50s, as head of public relations and employment at the American Rolling Mill Co. It was said—and it still is said by the dwindling old guys who attend “Wednesday lunch” at Mike’s restaurant out by the mill—that if you wanted to get anything done in this company town, Charlie Murray was one of the people you needed to see. 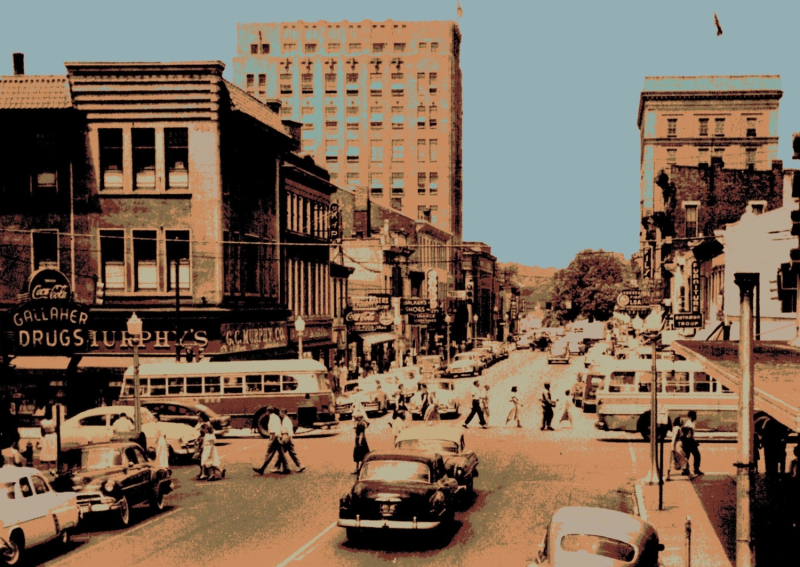 But the steel industry went to hell in the 1980s, and downtown Middletown was bled dry decades ago by a mall that was built on the outskirts of town. What storefronts aren’t vacant are grim taverns, tattoo and piercing parlors and pawn shops like the one by the old train station, where I pranced past a scabby-faced man standing by the locked door, waiting to sell something he’d been clinging to. 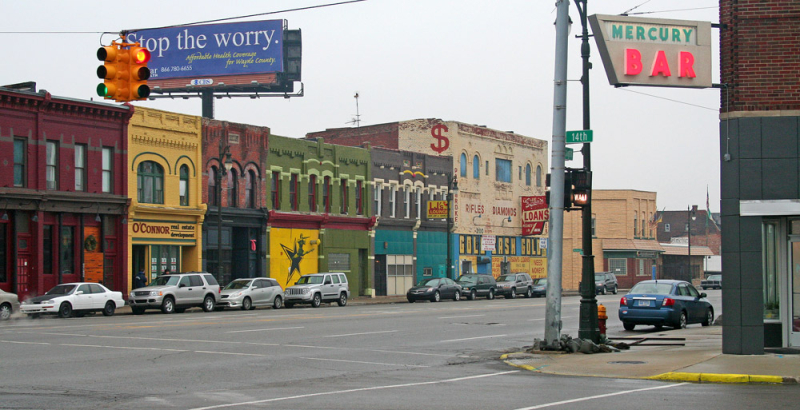 The Middletown Cemetery is overgrown, most of the paper mills are shut down, the Armco general offices are empty. The Middletown Journal has moved out of its headquarters and into the first floor of a mostly abandoned office building, and there are streets that I’ve been scared to run down.

“Why did you run on Columbia Street?” my dad asked with alarm.

And now even the new mall is half-empty, its anchor store Dillard’s having ceased to stock new items months ago. Walking through the mall, what you notice is the hollow whoosh of the air conditioning. Is it blowing air in, or sucking it out?

The only thing new in Middletown is a sparkling hospital, out by the highway. It looks like a hotel. Dad might as well have checked in, for all the time he’s spent there lately.

“It feels like December,” Dad said one morning. He was referring to the amount of time he has spent taking tests, waiting for results, waiting to begin waiting to die.

“I’m so not interested in politics right now,” he said in response to a pro-Obama e-mail someone forwarded him.

Ah, but McCain is leading here in the polls, and Ohio is such an important state, and I’ll probably spend more time here between now and November 4. The Obama campaign has a regional office on Main Street, and maybe I’ll jog in and ask about doing some canvassing.

First Street is just as raggedy as Columbia, but it somehow seems less desperate. Still, how exactly would I introduce myself to that old guy, on oxygen, asleep in his chair on his front porch in the middle of the morning?