I'm hearing a lot of dudes say that if their high school behavior was scrutinized, no one would be able to make the Supreme Court.

One particularly thoughtful gentleman wrote on Facebook, "Remember that pimply, pudgy kid in high school, momma’s boy in the chess club who never went to parties cuz that was for the cool kids, never went to dances cuz, well, who would go with him, played Dungeons and Dragon if it wasn’t Atari, in the computer club before there was an Internet, didn’t go near the gymnasium except for gym class cuz he’d get bullied by jocks (well, he was wearing dark socks and shorts hiked too high)? Remember that guy? He’s only man eligible for political office now."

Let's total it up, shall we boys? Let's get it all out there.

I was a teenager in an almost all-white, preppy little town in the 1980s. I was a pretty big asshole as a teenager, the FBI would find. I didn't save my calendars, and I wasn't popular enough to have much of a presence in my yearbooks, aside from a series of unfortunate pictures. 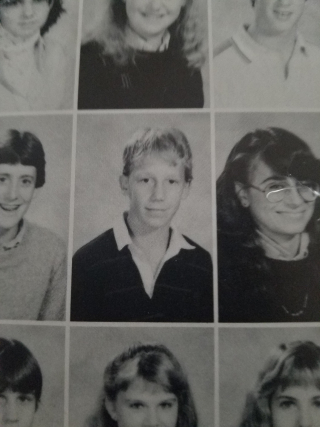 But as I remember it, I was as dumb as I looked:

In seventh grade, I got busted for forging my mother's signature on a report card. I was doing the job in class.

I was bullied badly in junior high, where my nickname was "squirrel." I responded to that by doing a little bullying of my own, probably to see how it felt. This is how some boys form their morality, I believe—by doing bad stuff and seeing how it feels. (I'm sorry, Kurt R.)

I did a bunch of vandalism, which included tearing the basketball rims off several kids' backboards, probably to show my best friend I had the balls. (He was doing it to show me he had the balls.) But then why more than once? Because it was funny?

I drank beer, passed out and barfed all over another friend's living room floor. In another incident, I drunkenly veered into a huge display of drinking glasses in a Revco drug store, shattering dozens of of them and running out before anybody caught me. I smoked dope at school, got caught and went off to rehab, for about half my junior year, in Sioux City, Iowa. I handle my skis better these days.

The first girl I ever French kissed was my senior prom date's best friend, in a motel bathroom about 20 minutes before we left for the dance. (She pulled me in there and planted one on me. Wowsers trousers!) The second girl I French kissed was my prom date, in the back of the van on the way to prom. (Beethoven's Fifth, to fireworks.) My prom date then caught me French kissing her best friend again—in the back of the van on the way back from prom. And so, my career as a womanizer unraveled quickly as quickly as it had begun. And later, when the prom date's enraged Scottish father took me out on the porch and bellowed into the night, "I ought to kick yer ass right now!"—my sphincter actually spasmed.

Late one Saturday night my freshman year at Kent State University, a roommate and I dragged an old ottoman outside of the dorm, set it on fire and went to bed. The detectives discovered it was us because the ottoman was stuffed with straw and there was a trail of straw leading from the blaze all the way to our dorm room door. When we opened the door, the policeman picked bits of straw off our shirts. I was charged with arson and nearly thrown out of the school. (Even Joe Walsh didn't get thrown out of Kent State.)

That's all I can think of, though I'm sure a thorough FBI investigation—or just my old high school chums, like Keaner, Nooz, Mossman and Hormone—could remind me of a few more. But not much more—and nothing worse.

Now, that's some pretty dumb and asshole-ish stuff, and one terribly sociopathic moment that really did ruin someone's prom and probably damaged her trust in men. (Not long ago I found an occasion to express my regret to her.)

But I think—had I actually had the brains and the drive to get a law degree and push my career in the direction of the U.S. Supreme Court—I could make it through a confirmation process, with all of the above, candidly confessed with the sincere head-shaking ruefulness that I actually feel.

And I feel confident enough in that to confess it here, to a jury of my grown-up peers.

An in fact I feel compelled to do so, to help us maintain the line between the imbecilic and indefensible and by-now incomprehensible high school hijinks that many boys engaged in.