You have no idea what it's like to host the World Conference of the Professional Speechwriters Association. The conference is still four months away. Already I'm eyeballing the roster of people coming and contemplating with increasing anxiety how in the world I am going to reconnect with all these friends and acquaintances in three days—and make friends and acquaintances of the rest—all while trying to run a conference? When will I have time to go to the bathroom? (That's it! I just won't go to the bathroom!) 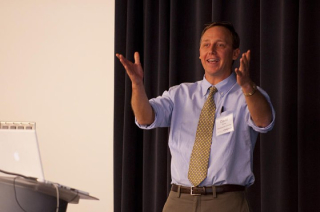 But I've been to enough conferences as an attendee to know that's stressful too. Who wants to feel like a 50-year-old freshman with butterflies just walking up to the registration desk?

That's why I've tried—in everything from my annual opening remarks to the structure of the conference to the very arrangement of the seating—to make the PSA World Conference the friendliest event in the communication business.

Still, a friend who has attended and spoken at dozens of communication conferences in her career told me that walking into last year's World Conference for the first time was "terrifying."

Because speechwriting is such a small and in some ways elite society, she reasoned that everyone there would know everyone else, and would have only one question for her: Who are you?

First off, there's the irony of being socially intimidated by a gang of shy people. At a speechwriters conference, pretty much everyone is scared. Speechwriters, generally, are not hail-persons-well-met. Speechwriter Eric Schnure calls speechwriters "a tight-knit band of isolationists."

And not as tight-knit as you think. Every year at the World Conference, about half the crowd is first-timers, flocked here from all over North America and all over the world. But when you approach this roomful of happy people …

… the people don't  look introverted, and how can you tell they're new?

Here's what you do, in order to feel as completely and immediately at home as you actually are the moment you enter these doors:

1. Remind yourself as often as you have to that speechwriters' "elite" status is the result of a demolition derby of career accidents. "My career has been mostly smooth sailing," said no speechwriter, ever. Next to professional boxers, speechwriters make up the most surprisingly sympathetic, humble society you ever encountered, and our conferences are all the warmer for that.

2. There is no "in-crowd." Not only has half the crowd never been to a World Conference, the vast majority of the other half have only been once or twice. There are a few people who have been around speechwriting for years and who know lots of folks. I know all these folks, of course. Do you know what these folks are looking for? New blood, with whom to share their speechwriting lore and wisdom. (That's you—and that's one reason you came, right?)

3. At the conference, if you're feeling anxious for a moment, find me. At these conferences I'm like the Serenity Prayer in motion, but without the wisdom to know the difference. Come over and introduce yourself to me, just to keep me from doing something stupid.

4. Sit down at one of the round tables—any table, but preferably one where people are pretending to look at their phones while actually waiting for a relative extrovert to sit down. Pretend you are an extrovert for long enough to simply sit down and mechanically introduce yourself and tell them where you work. (Which is in perfect compliance with the mores at this conference.) Someone will meet your forced extroversion with just a bit of their own, and immediately, a genuine, relief-fueled conversation will erupt among you and everyone else at the table. You are now Frank Sinatra and this table is your Rat Pack.

5. I know you're thinking now about the conference cocktail party—these, of course, are the scariest, which is why they are not called teetotaler parties.

Now, we've organized the World Conference so that by the time you attend the conference cocktail party, you will already have made friends—and after a day of speechwriting stimulation, you'll have much to talk about.

But even if you somehow went to the World Conference cocktail party cold, you would easily leave it with a dinner companion, or five.

At some communication conferences, some people truly do behave as frat boys and sorority girls. At a PSA World Conference, you can walk straight up into the chummiest-looking group, and elbow your way in and wait for a way into the conversation or simply a moment to announce yourself. Even if you burp a little, you will be instantly welcomed in. Especially if you burp a little.

Why? Because in addition to being relatively humble and shy themselves, speechwriters are far more curious than cliquish.

Please make sure I am one of them.