To the restaurant owner who fancied herself as Rosa Parks-in-reverse by kicking Sarah Sanders out of her establishment because "this feels like the moment in our democracy when people have to make uncomfortable actions and decisions to uphold their morals" and because "the restaurant has certain standards that I feel it has to uphold, such as honesty, compassion, and cooperation."

Huh. Until I heard that, the only correlation between restaurants and social dialogue was that my pal Eddie liked Biasetti's Steakhouse because, he said, "It's a great place to fight with your wife."

But if the restaurant owner needed to defend the honor of her restaurant—and her employees, whose fear and loathing of the administration influenced her reaction—why not just take the opportunity of Sanders' presence in your establishment to tell her at whatever volume she found appropriate what she thinks of her and her boss? And if Sanders doesn't like it, as a friend points out, "Let her decide to leave."

I've thought about this a lot—regarding my own Rhetoric Restaurant. In the gathering divisiveness of the last few years, a few conservative speechwriters have told me they feel underrepresented by the speakers and unacknowledged in the conversations at the World Conference of the Professional Speechwriters Association. 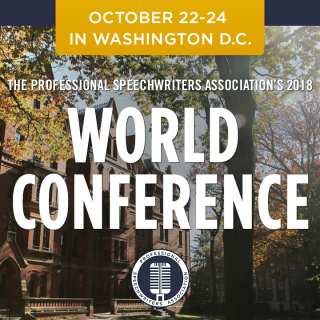 All I can tell them is that I read the speechwriting community—what it is, and what it wants to be—as closely as I can, and put on the most attractive, stimulating and useful conference I know how to stage. While I won't spare conference participants a provocation from a conservative speaker—in fact, I can name such challenges at every World Conference we've held—neither will I obsess over creating American right and left-wing "balance" for what is a global conference of intellectuals.

As I pointed out to one conservative correspondent, "a majority of speechwriters lean to the left, almost all speechwriters who I know despise or fear Trump, beyond political grounds—on rhetorical grounds. A post-truth presidency is not good for speechwriters—at least, the kind of research-minded, customar-adherant speechwriters who have traditionally populated the profession."

Mostly, I'll do what I did this year, which is to make the conference agenda as much about speechwriting and as little about politics as possible in this moment in Washington, D.C. Because there is no conservative or liberal way to write a transition, to weedle a personal story from a reticent executive or to get a speech past the corporate counsel. And ultimately, speechwriters come together for career conversation, and not more political punditry.

But what I will certainly do—and go out of my way to do, up to and including during my emcee remarks—is my very best to make everyone feel welcome at our conference. Not just welcome to be there, but welcome to express any idea they feel like expressing to their fellow speechwriters. (In professional settings, people usually do not pop off; if they screw up the courage to say something that may be unpopular, it's usually worth hearing.)

I must also remind their fellow speechwriters they are free to argue back, if they feel moved or obligated to do so. Occasionally at the conference, someone will come up to me, complaining in a stage whisper about something a speaker said. I just shrug. While I chose the speakers as carefully as I could, I did not program every word they would say. Nor did I choose the participants. Once the conference has started, I'm just the guy who rented the microphones. Separating politics from rhetoric is harder than it sounds, folks. You're at a conference: Confer.

Would I invite Sarah Sanders to speak at the PSA World Conference? If I thought she had something instructive or inspiring to tell an audience of speechwriters, I would. I don't think she does, but maybe someday she will.

But if she—or any other Trump administration staffer, up to and including Stephen Miller—registered to attend the conference,  we'd welcome them as long as their own contribution did not detract from the purpose of our annual meeting. And we'd expect the rest of our participants to take the same attitude. And, as I did last year with a longtime conservative speechwriter friend whose unwillingness to break with the Trump administration shocked me, I'd find them at the cocktail party and ask them some things I've been meaning to for some time.

Because we are communicators.