Napoleon said a leader is a dealer in hope.

But as president, that lack of understanding hindered him—at times, hilariously. 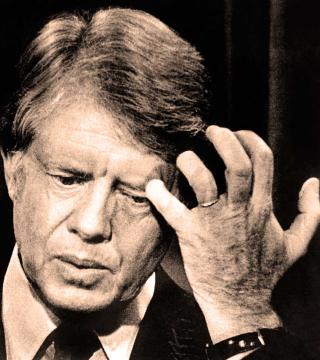 That's according to a new biography, President Carter: The White House Years by Stewart Eizenstat, who was Carter's admiring domestic policy advisor and who has set unapologetically out to "redeem [Carter's] presidency."

The presidency needs redeeming for the same reason that Carter's speechwriters never had a good word to say about him: To wit, from Peter Baker's New York Times review: "He was a downer for a country whose spirits needed lifting":

His inaugural address was "a tone poem, but with a downbeat note." He opened an energy speech to the nation by saying, "Tonight I want to have an unpleasant talk with you about a problem that is unprecedented in our history." In celebrating the creation of the Department of Education, he told a joyful crowd, "This thing won't work as well as you think it will."

Overall, "Carter's message was sacrifice and pain," Eizenstat writes. "When he faced Reagan's message of hope and optimism amid soaring inflation and interest rates, the very contrast itself was painful."

Indeed, his fatal flaw was captured in his infamous "malaise speech," in which Carter lectured the nation on its poor morale ….

(In fact, the "malaise speech" was even worse than that. It also lectured Americans on their morality. "Too many of us now tend to worship self indulgence and consumption. Human identity is no longer defined by what one does, but by what one owns. We've discovered that owning things and consuming things does not satisfy our longing for meaning. We've learned that piling up material goods cannot fill the emptiness of lives which have no confidence or purpose …")

It's the very most basic lesson in leadership communication: If a president, a CEO or a Girl Scout Troop Leader doesn't have anything hopeful and positive to say (with confidence), rational followers will follow someone else who does.