Yesterday I wrote about a couple phrases my dad passed onto me that I may be passing onto my daughter. Then I remembered this, which was published in the Chicago Tribune on Father's Day, 2003. —DM

The poet W.H. Auden was once asked by a college student, “Are words all we have?” Of course not, he replied: Words aren’t all we have, but they’re all we have to work with.” My father would no doubt agree.

In public relations and customer service, all the job applicants claim, “I’m a people person.” In publishing, the phrase you find in more than half the cover letters is, “I love words.”

As an English major, then a journalist, I’ve never related to the self-professed word-lovers all around me. Rather than worship words, I’ve always felt somewhat constricted, even threatened by them. I’ve always feared that if I wasn’t careful, words could take over my life in the same way they took over my father’s long ago.

My father, Thomas Murray, is a retired ad man, published author and active writer—of nostalgic essays for a classic car magazine, of articles for The Wall Street Journal. He is a good writer, lyrical and true. 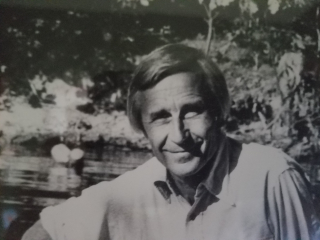 But I don’t know if Dad is best described as a writer, as much as he is a writee. He doesn’t make words as much as words make him. He is a soldier of words. To my father, good words are direct orders. His entire life is strung together by good words and the sayings they make; he’s built up a lot of them in his 76 years.

My father doesn’t try to solve impossible problems; he tries instead to “bite a basketball” or “push on a string.”

How did the typical white fellow get ahead in the 1950s, Dad? “You just sat up straight and ate your spinach,” he admits.

If he’s happy beyond self-consciousness, Dad will say: “I don’t care whether school keeps or not.” My three sisters and I have no idea what that refers to, but we know exactly what it means.

Unlike my late loving mother—also a writer, but of a very different temperament—my father isn’t given to pronouncing his children “brilliant”; he’s likely to claim grinningly that the four of us can “read and write both.” (Of a person who can’t read and write both, my dad is likely to say, “He doesn’t know whether it’s a bull fight or a foot race.”) These phrases do not come and go, but rather simply build up into an enormous vocabulary.

A drawback to this dependence on catch phrases for communication: Dad often repeats phrases that struck him funny in a certain context some decades ago, but that don’t make any sense to anyone now. One of his favorites is, “Pretty good, not too good.”

How was your trip to the dentist? “Pretty good, not too good.”

Do you think that’s funny? My dad thinks it’s hysterical. Every time. And he doesn’t care whether school keeps or not.

Another expression Dad uses because he likes it, he got from a television documentary our family watched together in the 1970s. An adventurer was trying to fly a pedal-powered airplane of his own invention across the English Channel. Assessing his chances, the adventurer said he thought he would make it “if the wind doesn’t blow and the chain doesn’t break.” From that moment on, Dad has used that phrase—modified by the slang dialect he employs to add a salt-of-the-earth flavor to many of his pet phrases—to highlight, however ironically, every endeavor that requires luck for its completion. Do you think you’ll be here by noon, Dad? “If the wind don’t blow and the chain don’t break!”

My dad, on a shallow, boorish acquaintance: “An empty cab drove up and Joe got out.”

My dad, on the misfortune of having to socialize with Joe: “When he walks into a room, all the air goes out of it.”

You can’t imagine how many applications my dad can find for this gem: “Yes, the lion sleeps with the lamb—but the lamb, he don’t sleep too good!” Or how hard he laughs, every time he says it. (Another dad-ism from the animal kingdom: “Never wrestle a pig. You both get muddy and the pig likes it.”)

Before hearing Jimmy Carter dismissed by a commentator with one clever phrase, my dad had a pretty complex view of the man. A lifelong Republican, he came so close to voting for Carter that my Democrat mother was furious with him when, in the end, he went with Ford. Now, ask Dad what he thought of the Carter presidency. “Carter? He was a lost ball in high weeds.”

Unlike his son, my dad doesn’t pretend to be an intellectual. He knows he’s just a writer. It doesn’t bother him to be so dominated by words any more than it bothers a potter to be covered in clay, a fisherman to smell of fish. I think he can think of a lot of worse things than words to have been pushed around by all his life—people, for instance. I think this arrangement feels natural to him, however uneasy and occasionally tiresome it feels to me.

And, importantly, I think my dad knows what to do when he reaches that realm that W.H. Auden acknowledged isn’t covered by words. When he has feelings he can’t adequately explain, Dad says, “The heart has reasons that reason doesn’t understand.”

But as for most things, they can be legislated by words. My dad on life:

“You wouldn’t worry so much about what other people think of you if you realized how seldom they do.”

“Hold on tight in the pale moonlight.”

And perhaps his favorite of them all: “Take care of the babies.”

That last phrase keeps ringing in my ears these days. My wife is pregnant with our first child—a child who will no doubt will by the age of four be able to recite all of the above.

The only question is, will I present these phrases as “what your grandfather would say,” or simply tell the kid: “Sit up straight and eat your spinach.”