There's a Maria Montessori quote that I can't find that has to do with the importance of involving your children in your work. Whatever that says, I agree with it. Because work, and what you make there, is the most reliable and regular source of satisfaction and self-esteem there is in this life. So helping your kid understand your relationship with that seems pretty high up on the list of parental responsibilities.

Except that, unless you're a fireman or a ballet dancer or a steam shovel operator, the meaning of your work is kind of hard to explain—and boring for a kid to listen to.

You can go overboard, like my dad did. He owned an advertising agency when I was growing up, and he shared his work with me so enthusiastically that when I was 10, I equated Dad's convincing Jimmy Stewart to tell the world that Firestone steel belted radials were safe …

… with Jimmy Carter's peace negotiations with with Begin and Sadat at Camp David.

Years later, after I'd been published in The New York Times and co-written a best-selling book, I wrote another book about Dad's advertising career to figure out if I had measured up. (It didn't work. Just as my dad was once flummoxed when his own steel-executive father looked around his office at the agency and asked him, "Bud, are you this good?")

I don't want my kid to think I am a giant. But I do want her to understand what I think I have achieved in my work, and what makes it meaningful to me—so that she knows to look for work that's meaningful to her, and recognizes it when she finds it. Which means I have to understand myself, exactly why I do what I do.

Of course, these all lessons usually come out accidentally. When I was buying my company two years ago, she asked me why my shoulders were up by my ears for three months straight.

"Are you afraid of how much work it's going to be?" she asked.

No, I told her. I wasn't afraid of the work.

"I think I know what it is," she ventured. "You're afraid you're going to screw everything up."

She was 12 then. Two years later, I guess she's seen that I haven't screwed everything up so far. She's probably concluded that buying the company was a risk that's paying off. But she's shruggingly unimpressed by an article I've had published in The New York Times and the fact that the PSA's World Conference that I and my team organized from cocktails to keynotes was featured on the BBC and run on C-SPAN. I've been writing the whole time she's grown up and we have a lot of writer friends. One of our dear family friends is the celebrated podcaster Phoebe Judge, whose hair my daughter braids when she's here.

(TV celebrity doesn't do it for her either.

Recently we were in the car, on a road trip to Memphis. We were going to visit the Lorraine Motel, and I wanted her to hear the mountaintop speech first. We’d also been talking about red states and blue states and suddenly she asked about Obama’s speech, in 2004.

I told her to cue up “Obama 2004 DNC” on her phone. She clicked what came up—an old TV segment.

A clip of the great speech. A talking head, analyzing it. Ah, I didn’t want a bunch of analysis, just the speech.

“That’s one of our teachers!” I told her. 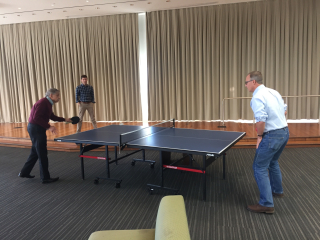 “That’s the old guy who beat me at ping pong last year!”

But then—on our last night in Memphis, I got an email from a college senior asking for my advice about a career in speechwriting. I was bored, so I read it to her.

How did the kid find out about me? she asked.

Because I'm the head of the Professional Speechwriters Association, I told her.

"Oh my gosh, Dad, that's amazing!" she said, with genuine surprise and admiration. "People go to you for advice!"

I guess I also ought to pay attention to what my work means to her, too.

And I guess I'd better make sure I give that kid some good advice.