At a Professional Speechwriters Association seminar in Chicago earlier this month, another speechwriter asked me: How do I animate and effervesce my wooden, flat speaker?

Bring in a speaking coach, I told her.

I get sick of telling speechwriters that.

Speaking coaches can polish a rough speaker, but teaching a stiff speaker to act animated is like tying ropes to the arms and legs of a corpse.

Speakers are stiff because they are scared. And they are scared because they should be scared. For they have permanently stolen an hour from the lives of many human souls, and they know full well they don't have anything to say that is of real importance even to themselves, let alone to this innocent crowd. 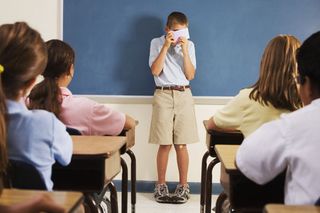 to choose from a list of five weary topics on which to give a speech to the class. And the fourth-grader felt like a fraud because he or she was made to be a fraud, forced to pretend he or she had a genuine, studied, heartfelt, unique and useful opinion about "How does pollution affect society?" Or was it, "Are zoos good for animals?"

And so the fourth-grader stood, shame-faced but brave, in front of classmates with whom he or she had exchanged fart jokes earlier that very morning, and pretended to be an authority on the benefits and drawbacks of human cloning (while the classmates, with mixed success, pretended to care). And said the expected things for the required amount of time and sat down and hoped that the next such assignment would be proceeded by death.

And that's pretty much exactly how public speaking went down for the fourth-grader, as he or she passed through junior high, high school and college, where the phony passion was applied to mouthing rote arguments for or against euthanasia, raising the drinking age and the legalization of drugs, exactly in that order.

That's when the fourth-grader became your client. And you wonder why your client is elusive and would appear to prefer to focus on any aspect of her work rather than the speech that's coming up. Don't be surprised! Your client, when it comes to public speaking is still a fourth-grader! And do you know who you are? In the fourth-grader's mind, you are the teacher, who is trying to get the fourth-grader to choose one of the five weary topics that you have suggested!

Long before the fourth-grader understood his or her own mind well enough to have anything genuine to say that could be sustained over more than a single minute of oratory, she had utterly decoupled public speaking from true candor and intimate communication. So if you are to rejoin these two concepts in your fourth-grader's fully grown (and thus half-ossified) mind, you will have a hell of a job ahead of you.

You have to ascertain something true and deep about what motivated the speaker to climb all the way from the fourth grade to the position of CEO of your company. Are we dealing here with a brilliant or dogged engineer? A passionate financial analyst? A natural motivator of people? An idealistic believer in the industry? Or just a gasoline-driven ambitious maniac? Whatever the qualities that got the fourth-grader all the way to this exalted position (far ahead of all of the fourth-grader's classmates)—well, you've got to understand something about those qualities came from, and how they connect today with the fourth-grader who's still inside.

Because she suddenly realizes: She can't remember giving a speech that sounds so much like herself.