On my microwave oven, there are buttons for cooking standard foods. A friend of mine is a cook, and he was making something in my kitchen. He pointed to the "Popcorn" button, the "Hot Dog" button and the "Mac & Cheese" button, which he thought were acceptable. But the "Chicken Nuggets" button—"that's discouraging," he said.

Well have you noticed the canned response buttons on LinkedIn? 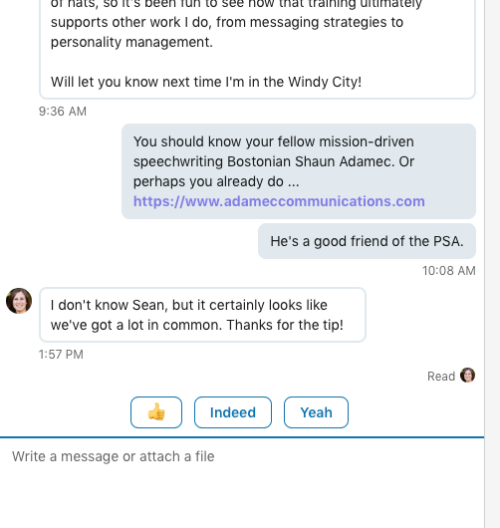 I don't know what algorithms they're using to come up with these buttons, which do somehow change with the circumstances, but it's discouraging that "indeed" and "yeah" are now roughly analogous expressions (both meaning, roughly, "totes mcgotes).

I do know that the first time I bring myself to push the "yeah" button, it will be a death—a little writer's death. (As it also was a few years ago when a speechwriter correspondent was astonished and insulted when David Murray sent him a winky-face emoticon.)

Once I was the only person on a suburban Chicago bus. I struck up a conversation with the driver, who asked me what I did for a living. When I told him I was a writer, he moaned loudly. He'd hate to be a writer, he said. He said he looks at the newspaper and he sees all those words and wonders, Does the writer have to write every one of those words?!

Nowadays, even "indeeds" are done for you.

Can antidisestablishmentarianism be far behind?

Well, my algorithms tell me we're coming to the end of the column.

So go ahead, dear reader. Push "Profound" or "Ha!"