This is normally the time of year when professional speechwriters are startled by a knock on the door of their obscurity, and then flattered to be asked what they think the president should say in the State of the Union Address.

They scratch their chins, and proceed to say the same thing they said the year before.

They say that the SOTU typically isn’t really a speech as much as it’s a “laundry list” (even though no one remembers what an actual “laundry list” was in the first place).

They publicly pine for a different kind of SOTU. As I wrote ahead of President Obama’s final SOTU two years ago, speechwriters seek a speech that’s “thematic, rather than comprehensive. Instead of piling up, summing up.”

We live in an age when any leader, not just a president, has a mini media empire at his or her disposal, to get across news, policy proposals or opinions. So the unique opportunity of any speech—not just a State of the Union—is not primarily informational, but rather emotional and social and inspirational. For a speech, you have everyone’s attention all at once; they can all look the leader in the eye, and turn, when the leader says something significant, and look one another in the eye, too.

So to use that opportunity to deliver essentially a teleprompted tweetstorm of boasts and policy proposals—as presidents have traditionally done—squanders the special chance that the speechwriter sees: To galvanize an audience (and in the case of the SOTU, to help unify a nation) and possibly even reset an agenda.

“We are not enemies, but friends,” as Lincoln said in his first inaugural address. “Though passion may have strained, it must not break our bonds of affection. The mystic chords will swell when again touched, as surely they will be, by the better angels of our nature.”

That’s what a speech can say, to everyone all at once, in a way that no other medium can. And that’s what speechwriters hope, usually in vain, that every SOTU will do.

This year, based on this president’s rhetorical track record, we have even less reason to expect a unifying speech, even if the need for one has seldom been greater.

What will the president say in his first SOTU next Wednesday? 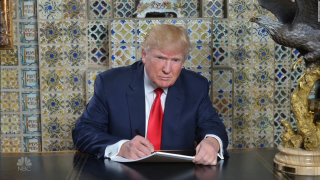 We may take clues from last February 28, when President Trump delivered a rhetorically conventional, SOTU-like speech to a Joint Session on Congress. “I am here tonight to deliver a message of unity and strength, and it is a message deeply delivered from my heart,” he said that night.

The speech wasn’t decried by pundits for its conventionality, but lauded for its conventionality. It came as a comfort, for speechwriters and other political observers, to see the president read some standard platitudes from a teleprompter. Perhaps it was a sign that he would observe some time-honored rhetorical norms.

But the president’s spoken and tweeted rhetoric of the last year has left most speechwriters from all political stripes speechless, and without hope of a prompt return to responsible rhetoric, let alone wound-binding words.

If you ask former presidential speechwriters to render advice to Trump’s speechwriters, you get silence from the scribes on the right—and from those on the left, some version of what Former President Carter speechwriter Robert Rackleff said in on a panel at the 2017 World Conference of the Professional Speechwriters Association. “Quit your job, before it’s too late. And you’ll have a nice little eight months’ entry on your résumé. There’s nothing to be gained by staying on with that man.”

Not that any speechwriter would ever count a leader out. But President Trump has to “figure out what he actually believes … what he thinks he’s going to do with his time in office,” said former President Clinton chief speechwriter Jeff Shesol on the same panel. “And you can write it any way you want to write it, but he’s got to believe it, he’s got to own it, he’s got to go out and articulate it, and he’s got to do it consistently.”

The State of the Union Address would be the moment for him to begin.

But the speechwriters I know aren’t holding their breath, and I’m not either.