Ukrainians are tough and capable and unsentimental farmer types, so you would think rats would avoid this place the way Chicago's street gangs mostly have. Last spring a Ukrainian neighbor stabbed a rat to death with a pitchfork without interrupting his conversation. But that grisly anecdote didn't get passed on to the other rats, who are really going to town around here.

It's not just our neighborhood, of course. It's all over Chicago. It used to be you rarely saw a rat in good neighborhoods here, and when you did you remarked on the size. At some point, you began remarking on the numbers. And then you stopped remarking at all. A couple years ago on the Fourth of July we were shooting off fireworks in the alley and the panicked rats zig-zagged all over the place while a little girl threw rocks at them. Charles Dickens would have been disgusted. (Do not watch this.)

We don't know why they're here, but everyone has a theory. The rats eat dog poop. The rats eat the Ukrainians' chickens' poop. (Or is it the eggs they're after?) The rats pilfer tomatoes out of our pizza garden and tote them across the lawn like Templeton, in Charlotte's Web. The rats came from a nearby building demolition. The rats come from the other side of Western Avenue, the wiseguy at the J&M Tap says, with racial undertones. The rats are here because former Mayor Daley stopped poisoning them seven years ago to save a few bucks on that year's Streets & Sanitation budget. 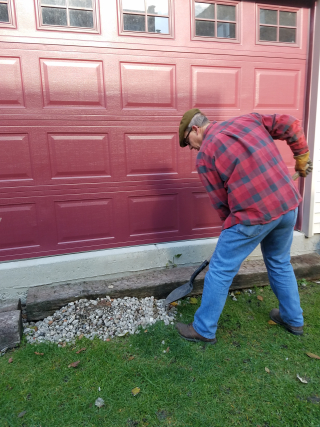 In general, the women in the neighborhood talk about the rats more than the men. Sometimes I get impatient with all the talk about rats, who don't really affect your life day to day if you just ignore them. But when I'm on my balcony at dusk, showing off my house to some new friends, and a family of rats shambles nonchalantly across the railroad ties by my garage, I think: This can't be good for our property value—or, come to think of it, my image as a fancy writer.

Rats in the house: the sum of all fears, of course. One hot night last summer, I was down in the basement with my 13-year-old daughter, to get a fan for her bedroom. We watched four rats scurry from four corners of the basement into an unscreened drain hole they'd come in through. We don't keep secrets in this house, unless their revelation would involve us moving to Des Moines, Iowa that very night. "Not a word to your mother." (I put a heavy bucket on top of that drain hole and and bought a device that emits a rat-repulsing frequency and didn't tell my wife about the story until I was sure.)

We aren't alone with the rats, of course. We are together with the rats. Rat-related calls to the city soared to 46,879 last year—the most ever recorded. In a leafy neighborhood on the north side there was a tree infested with rats. The "rat tree." It was finally chopped down. But the near northwest side of the city, where we live, does seem to be particularly besieged. Last week, a community meeting at the J&M Tap focused entirely on the rats. "A whole meeting about rats! I never seen anything like it!" the wiseguy said with a cackle. "An hour and a half meeting, all about rats! I been living on these two blocks for 15 years. I think some a dese rats are forty or fifty years old!" (Chicago wiseguys are good at sounding like know-it-alls, even though they don't know more than anybody else.)

Chicago Mayor Rahm Emanuel has proposed to spend an extra $500,000 on more rat-resistant garbage cans, and increase from 25 to 30 the number of Chicago's "rat-fighting crews," according to the Chicago Tribune.

This seems inadequate to me. How about you?

Over the last few years you've heard about the terribly stubborn problems in the poorest neighborhoods in this great American city.  We'll, we don't know what to do in the hottest neighborhood either.