Recently I compared the Trump supporter to me, at the dentist.

I realize it's not only Trump's followers that I can relate to. It's Trump himself.

Trump reminds me of me, at the wheel of my Subaru, so beat up from driving in the city that part of its right-rear fender is in the trunk.

When I drive in Chicago, anybody in my way is a jagoff, whether or not they are obeying traffic laws. 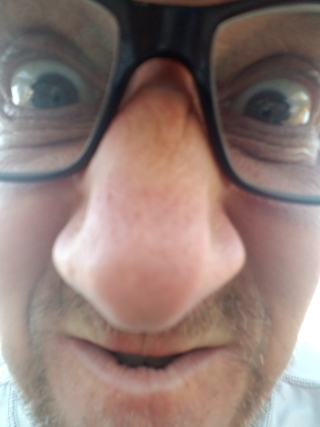 Anybody in my way who has actually violated a traffic law (or even a mere ettiquete) is a fucking jagoff. And if you ask me how exactly I came to such a holistic conclusion about a complex and beautiful human soul based on a tiny moment in his or her life and only in relation to how it affects me—you are a jagoff too, even if you're eight years old.

Everybody in a traffic jam just a bunch of jagoffs. (I inherited this clarifying point of view from my father, who would bellow in a crowded parking lot, "Get to your homes!")

Anybody who criticizes my driving—like the Mrs. Doubtfire lookalike who last week called me a jagoff at the top of her lungs when I jumped the gun at a four-way stop—is a jagoff. Not even if they're right, but especially if they're right.

Racism creeps in: A friend says that when he's looking to sneak into a lane he seeks out Asian women drivers, because in his 65 years of observation, it seems that Asian women are "easily bamboozled." Personally, I don't do racial profiling myself when I drive, but that's only because I don't have the patience to sift through all these jagoffs.

If someone does me a solid and lets me into a lane, I wave to her, and secretly believe she or he thinks I am sexy. But you never really know anybody, and if she cut me off two tenths of a mile down the road it wouldn't surprise me at all, the jagoff.

In all traffic matters, I don't care if I'm right, I don't apologize if I'm wrong, and I don't even secretly regret honking vehemently at the utterly innocent. (I once asked my wife how she decides when to finally lay off the horn. "When I'm not mad anymore," she said.)

This isn't a matter of morality, this isn't balanced journalism, this isn't principled humanism. This is out of my way, you fat old jagoff.

This is not safe for work.

This … is President Trump.