I called my pal Tom Gillespie, who grew up in the 1980s in Cleveland, around the underground construction business. (Think water mains and heating oil tanks.) It was a world where laborers and heavy equipment operators alike routinely drank beer at lunch and often never exactly stopped until they got home for dinner.

I told him I've been perturbed by this term I keep hearing from hipsters, bros, and middle-aged soccer moms: "day drinking."

These Uber-taking twerps show themselves on Instagram sitting on a sunny patio with a chardonnay on a Saturday afternoon, and call it "day drinking."

Tom, who still lives in Cleveland and not on Instagram, was not familiar with the yuppie yusage. (I'd also bet Starbucks gift cards to fritters he's also blissfully unfamiliar with the term, "cultural appropriation.")

He reminded me that day drinking itself isn't a new term. But day drinking used to mean something more sinister, far beyond a few beers at lunch. It used to mean a guy or a group of them, for whatever reason, blowing off work and family and sanity itself in order to guzzle liquor during a workday, preferably in a tavern without windows. 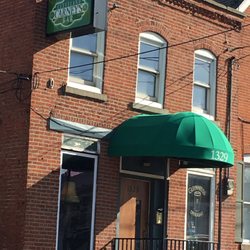 Day drinking was a shameful thing if done frequently, and an embarrassing thing if done occasionally and St. Patrick's Day if done annually.

If bros and hipsters now own "day-drinking," who owns the morning shift at Carney's Top o' the Flats, across Washington Avenue from the Stella Maris chemical dependency center?

"If you don't like it here," says the sign behind the Carney's bar, "go across the street."