There are a few compensations for being a writer, but honestly, it's thin gruel with weird chunks.

I mean, I guess people assume you're smart, which is nice. (Except you're actually not smart about anything other than writing, which they find out quick enough.)

Being a writer lets you meet people you otherwise wouldn't and ask them questions that would otherwise be impertinent. But it also means you'll meet people you wish you hadn't, who will ask you questions like, "Why don't you write a book about the education system in this country?"

And it's always cool to see your name in print, but that thrill lasts as long as it takes to reread your article in the glossy magazine with the nice pictures—until, as a writer pal says, "You get to the last word and you say, 'Fuck, now I've gotta do another one.'"

But mostly, the best thing about being a writer is dreaming about the next thing you're going to write that's really going to be great.

Every once in awhile, though …

Last weekend my 13-year-old daughter and I drove with my dear friends Bill and Betty Sweetland down to Ottawa, Ill. to play golf at this little golf course called Pine Hills that they introduced me to about 25 years ago—when they were about my age, and I was 24. 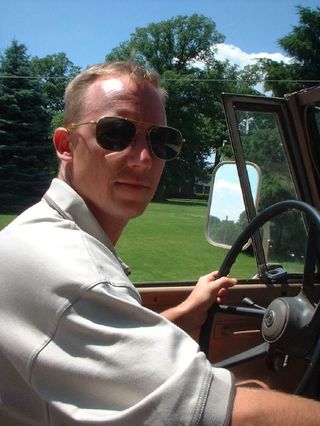 as they prepared for this obscure amateur tournament, a stop on Illinois' "Manure Tour." The editor correctly pointed out that there was no story there, but promised that if I wrote it, he'd read it. I drove my 1964 International Harvester Scout down there, mowed and raked and golfed and drank and wrote for two weeks, and he published this intimate profile of a family business, which he titled, "Sweet Spot." And it won a Peter A. Lisagor Award for sports journalism.

None of us had read the piece since it (and my daughter, who would be suspiciously named Scout) came out in 2003. Self-indulgently, I asked Bill, whose stentorian voice once sang for the Chicago Lyric Opera, to read the piece aloud on the trip down.

He did, pausing to laugh many times along the way at the humor in the story. Once, he choked up at its sorrow and stopped reading, to compose himself. And in the backseat, Betty listened and poked Scout, who was drifting off a bit—"listen to this!"

And I laughed, and cried a little too and marveled at how good the story really was—from a distance that allowed me to say with pride but no longer vanity, "Boy, that kid really did know how to write."

What a happy, happy moment—the kind of which only a writer can have.

And only a lucky writer, at that—with beloved friends who love him, too.