I’ve quoted the writer Marilyn Robinson, who wrote that fear is an “excuse” that has achieved “a respectability I’ve never seen in my life."

I’ll take it one further, and say that Americans, one by one and by and large, don’t actually fear terrorist attacks. Not any more than we fear dying in a plane crash. We’re not even afraid of car accidents, unless we’ve just had one, and they happen all the time. I think we are pretty damned sure we will not die in a terrorist attack.

I mean, do you know a mother who says she won’t take her kids to New York City or D.C., because that’s where terrorist attacks are most likely to take place? Do you know a father who won't fly, on account of terrorists used planes on 9/11? Oh come on, you would tell those parents, and you'd go home and laugh with your spouse about overprotective parents these days.

But now a politician comes along and promises you that by just giving the cold shoulder to some foreign-born jamokes you never met and never will, it will reduce your already infinitesimal chances of dying, or of your children dying, in a terrorist attack. 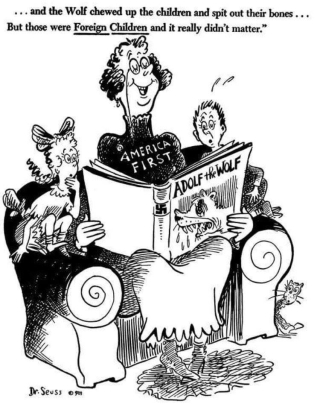 And suddenly you are contemplating your ultimate responsibility, to keep your children "safe"—this utterly relative term that is always used by politicians as if it’s absolute. You don't actually feel endangered, but now that you have a chance to keep your children truly safe, you must take it—and to hell with the foreign jamokes, who can keep their own damn kids safe (on a rowboat to Europe).

Who are the children here?