I can't believe there's another night of this.

And Bannon answers my question: "I'm from the other side (though not really a Trump supporter at all), and I thought this was a very effective speech—far better than anything we heard at the RNC convention last week. I didn't vote for him in 08 or 12, but I think I'm writing Barack Obama into my ballot this November." Of course, that's not going to do anybody any good. So Bannon, and all Republicans, have to decide: Do they or do they not (mostly) believe what Barack Obama said about Hillary Clinton tonight? That's not a hard one for me. But I recognize it's a hard one for them. And I hope they make the right choice—and hope I'd make the opposite choice if there was somehow, someday, an opposite equivalent. Because as Ted Sorensen wrote: "We all breathe the same air. We all cherish our children's future. And we are all mortal.”

Can anybody tell me, from either side of the aisle, that that speech was ineffective, or wanting in some important way? ("This guy is no Tim Kaine," Bannon cracks.)

"Time and again, you've picked me up. And I hope sometimes I've picked you up too. … And how I'm ready to pass the baton. … and elect Hillary Clinton president of the United States. … Thank you for this incredible journey. Let's keep it going."

"These values could travel to Hawaii. … to the other side of the world. …. They could be passed down to a half-Kenyan grandson. … They knew these values were exactly what drew immigrants here. And they believed that the children of those immigrants were just as American as their own. … America has changed over the years. But these values that my grandparents taught me—they haven't gone anywhere. They're as strong as ever. … They live on in each of us. … What makes us American, what makes us patriots, is what's in here. … That's why anyone who threatens our values, whether fascists, whether communists, whether homegrown demagogues will always fail in the end. … That's what Hillary Clinton understands."

"That's what happens when we try." And the arena bullshit, that I've always hated, that gets used by every politician as a rebuke to all criticism. Thank God he didn't end on that hoary shit.

"We all need to be as vocal and as organized and as persistent as Bernie Sanders voters have been in this election. … That's right, feel the Bern."

The essential message here: Hillary knows what I know. The truth. Take it, he's saying, or leave it.

"We don't look to be ruled. America's never been about what one person says he can do for us …"

"Most of all, I see Americans of every party, every background and every faith [who believe] we are stronger together. That's what I see. That's the America I know. And there's only one candidate in this race who believes in that future."

Understatement: "This is not your typical election." Sets up credible statement: "What we heard in Cleveland last week wasn't particularly Republican. And it sure wasn't conservative."

This is sounding like a State of the Union Address in arrears.

"I was so young that first time in Boston." (Only 12 years ago? Why did that shock me?)

I often try to see the only president I've ever loved through the eyes of people who hate him. It's easiest to see their point of view when watching one of these horrible fucking propaganda videos, that would embarrass Goebbels.

And, Rachael Maddow loved it, presumably because he didn't say the word "girl." Adds Shawn Bannon: "Tim Kaine is at his best when he's doing the world's worst Donald Trump impression."

Speaking of speechwriters, that conclusion was definitely written by one—and would have been better delivered by one. That was a total snoozer of a speech, and will be forgotten before I … what?

Kaine quotes the ghostwriter of The Art of the Deal, from the New Yorker profile every ghostwriter should read: "Lying is second nature to him."

My dad once said a Cleveland Browns placekicker named Dave Jacobs was "a perfectly nice guy, who ought to be running a car wash." Why did that come to me right now?

The Bern's not feeling it.

Will he go through all 10 Commandments?

Speechwriter pal Shawn Bannon: "Tim Kaine should emntion that if elected he'd cure us all of our insomnia. Good grief. You know when they say a speaker is so good he could read the phone book and people would listen? They aren't talking about Tim Kaine."

My sister-in-law texts, "I don't know what 'jamoke' really means, but it seems like Kaine is it."

"Can I be honest with you? I never expected to be here. But let me tell you how it happened." These should have been the very first words of the speech. Thank your family and friends and clear your throat on your own time, Tim.

This is off to a snoring start.

Like a lot of people, I guess, I am coming to Tim Kaine completely fresh. Tim, good to meet you. I understand you're from Virginia.

Steve Schmidt on MSNBC says it's unprecedented to call an opponent insane. But what opponent has ever been exactly insane?

He's challenging Americans to face our fears, as our honored ancestors have.

"I hate to say it, but I think a default posture of human beings is fear," said writer Marilynne Robinson two years ago."What it comes down to—and I think this has become prominent in our culture recently—is that fear is an excuse. 'I would like to have done something, but of course I couldn't.' … Fear has, in this moment, a respectability I've never seen in my life."

"Trump says he wants to run the nation like he's running his business? God help us. I'm a New Yorker. And I know a con when I see one." Bloomberg may be doing Trump some real harm here, by speaking to those dolitsh undecideds who can't figure out whether they like the White Sox or the Cubs.

"Whatever our disagreements may be, we must put them aside for the good of our country. And we must unite around the candidate who can defeat a dangerous demagogue."

"… the example of our power and the power of our example." Oh, all right. But whatevs. Joe's work here is done.

MSNBC scroll: BIDEN: TRUMP'S INTEREST IN MIDDLE CLASS IS "MALARKY" Some associate producer kid probably had to look up how to spell "malarky."

"How can there be pleasure in saying, 'You're fired'?"

How different this is from 2000, when Gore couldn't make up his mind if he wanted to connect with the Clinton that brung him, or disassociate. And Biden calls Michelle Obama, a 50-year-old, a "kid." Reminds me of once hearing Studs Terkel lay that term on "this kid Carlin." When George Carlin was 65 and Studs was 160. It's good to have guys around who can call old people "kid."

Speaking of going on … even Biden's videos go on too long. I need a sack of popcorn.

Joe Biden is about to go on. He told the Morning Joe folks this morning that he told his speechwriters not to write speeches telling whatever audience he was facing how he was going to solve all their problems. He told them to write (and more importantly, research) speeches that demonstrated only that he truly understood their problems.

I can't tell whether Panetta looks like he's had some work done, or like he should have. His speech definitely should have.

Banished to the kitchen tonight by my wife, who cannot stand the sound of my typing. Can you believe this? Did she not know I was a writer when she married me? 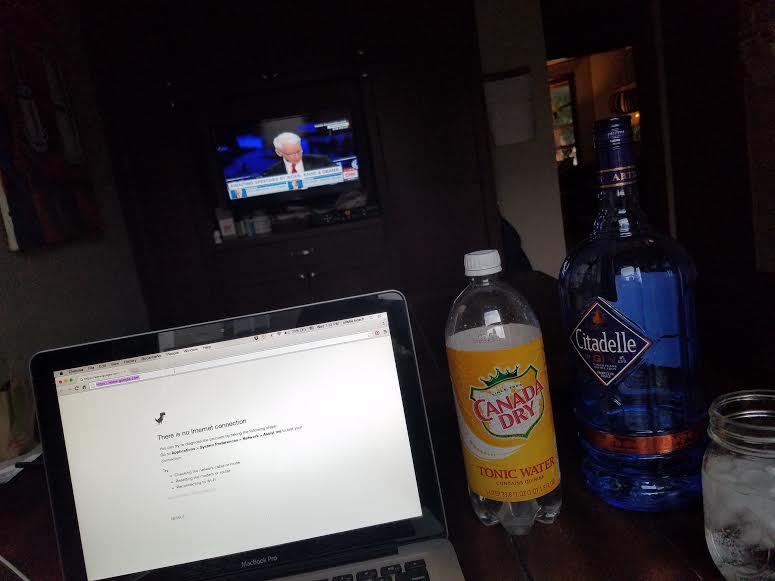