CLEVELAND—I had a couple of beers before heading over to the Quicken Loans Arena, where alcohol was only served in the private suites. So when I saw a guy with an “America First” sign, I felt just loose enough to ask, “If America’s first, who will be second?”

“The rest of the world!” the guy shouted happily.

We’ve seen what happens when one nation sets itself against the rest of the world.

My dad fought in Europe, in World War II. He wound up in Berlin, and what he saw there, and the rotting death he smelled there, he didn’t say much about when he returned. He said so little, in fact, that his steel-executive father, on a fact-finding trip to assess what it would take to make German industry work again, was shocked by the total demolition and human degradation he saw, two years after the end of the war.

“Bud,” my grandfather said to my dad when he got back. “You didn’t tell me.”

My dad’s response was, “How could I have?”

When Adolf Hitler had spoken to the German people during the Great Depression 15 years earlier, he had convinced them they had nothing to lose. The currency was worthless, the country was secretly controlled by Jews and had been unfairly treated by all its neighbors, and it was time to take drastic measures. Many Germans must have been skeptical that he could deliver them from such dire straights, but even when it’s a drunk who knocks on your door at midnight and tells you your house is on fire, you’re susceptible, however skeptical, to suggestion.

By 1945, the German people realized they’d had far more to lose, back in the early 1930s, than they’d thought. Despite their troubles, they’d still had everything to lose. 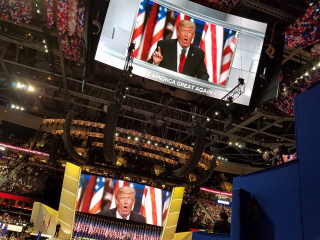 Republican National Convention—“look at them eyes!” shouted a guy behind me. “He looks like he’s looking right at you, talking to you personally.” “He’s not afraid!”—was of a place with not one decent thing in it, and a people with nothing to lose.

We’re being taken advantage of and screwed by every country in the world, on every front from trade to foreign policy. Our borders are being overrun by violent criminals “roaming free to threaten peaceful citizens.” And while we’re being raped from without, we’re being smothered from within. “America is a nation of believers, dreamers, and strivers that is being led by a group of censors, critics, and cynics.”

Imagine if you sat down on a barstool and struck up a conversation with a stranger who described his life in these terms: His job is boring, his boss is a bastard, his wife is a shrew, his kids are lazy ingrates and his house needs a new roof. You’d start to figure out the problem might not be the world, and it might be the guy. And you’d excuse yourself to pee and climb out the bathroom window.

But Donald Trump is appealing to a nation that has a lot of people like that. People too proud to express self-pity directly. But people who express their self-sorrow through sorrow and rage on behalf of other Americans, and America itself.

The contrast between the American horror story described in the arena and the atmosphere outside the arena was stark. These were a beautiful four days in Cleveland, Ohio. I grew up near here, and boy, if you want a nothing-to-lose vision of an abandoned, crumbling, hopeless place, you should have visited these downtown streets and this polluted water in about 1979. This town was on its ass, and if you delivered a Clevelander from back then to the hip and cheerful place these Republican delegates partied in here this week, he would have thought he died and went to San Diego.

I heard from a number of Clevelander/Trump fans this week how far the city has come back over the years. But then they went into the gleaming new Quicken Loans Arena and cheered angrily as Trump relentlessly described an America that looked like last page of The Lorax.

And of course Trump has been painting that picture for a year, pounding on it long enough and consistently enough that it sounds familiar. And what’s familiar rings true. And rings true—even partly true—becomes acceptable in polite society. A tanned, middle-aged Clevelander in a red cocktail dress told me she’d been for Trump from the very beginning. “Quietly,” she said. “Now, I think everybody is willing to say it.”

All around me, men and women were laughing with giddy astonishment that somebody finally dared to say these things, in front of God and everybody. “He’s not a politician!” a man behind me cried. “No politician would ever say that!”

But what Trump is saying is only emotionally accurate. In America we do have an incredible amount to lose by electing the wrong president—and especially by electing a president so animalistic in his hunger for this power that he would describe a nation with as many resources and as many fine and brilliant human beings we still have here as a filthy latrine of a place, in need of drastic measures of every imaginable kind.

On the day that the police officers were shot in Dallas—the dark culmination of a month of utterly discouraging incidents that do seem to be building in frequency and in magnitude—American symphonies played, the Mayo Clinic cured people of cancer, Silicon Valley engineers worked on projects unthinkable by most of us. Americans taught their children well, Americans nursed their aging parents, Americans gave beautiful eulogies for beautiful Americans. And the next day, the wise and eloquent Dallas chief of police led a pitch-perfect and spiritually healing response to the madness that had occurred in an American city where American life will go on.

This is such unfamiliar territory for me. Over the years I’ve been the asshole telling my fucking golf and sailing buddies that life isn’t a bowl of cherries for everyone, and resources must be directed toward poor and downtrodden people in forgotten neighborhoods and dying farm towns and Appalachian hollers.

To have to remind Republicans not to forget that almost all of us are still infinitely more comfortable, clean, healthy and safe than any of us were 100 years ago. To have to ask fellows with big bellies full of steak and gin—people like multimillionaire Jack Nicklaus, who supports Donald Trump because “he’s turning America upside-down”—just how exactly Barack Obama has cramped their style. To have to wonder if these people ever drive down their own leafy streets, wave at their helpful neighbors and walk into their loving homes and think, “Hey, this isn’t so bad.”

And with the backdrop of the shit we’ve witnessed this month, this week in Cleveland felt exciting, too. (In person, even. I was sitting in the cramped, crowded canyon of 4th St. on Wednesday when several dozen police officers yelled to “make a hole!” and parted the people to attend to what seemed like it must have been some kind of serious threat. But it was funny. Nobody panicked, including me. We’re more afraid for our nation than we are for ourselves, even when we are in danger.)

But however fucked up things were in 1968, I’ve never heard it described as a time when America had nothing to lose. And that’s certainly not how it felt outside the Quicken Loans Arena this week in Cleveland. It felt like meeting everybody on the Internet, in person. It was at turns confusing, funny, vulgar and profound. It was dumb and smart and representative of reality and a total distortion. In short, it felt like the world.

Not the end of the world, but rather life: American life in a middle-American city under mostly sunny skies and often with music in the background. Americans opening doors for people, Americans saying excuse me, Americans thanking Americans (and American police) for their help.

The world outside the Quicken Loans Arena was a lot better than the world Donald Trump described inside of it, to the cackling glee of some of the Americans sitting around me, and also the thoughtfulness and discerning applause of others.

I understand the appeal, especially after eight years of a slightly egg-headed leader who values balance and nuance and measured responses, of a guy who promises to clean house. One of the surest applause lines for Trump, no matter what issue he was describing—from trade deficits to immigration to crime—was when he promised to fix the problem right now. Barack Obama, and also Hillary Clinton, do not make such promises. And it does feel, as ISIS blows up a group of innocents seemingly every week, like being told, “Your business is very important to us. Please hold for the next available operator.”

But in a democracy, citizens do have to use their common sense. “Everything he’s saying is just common sense,” said a very happy Trump supporter sitting behind me last night. No, sir, it’s not common sense to say we’re going to destroy ISIS in short order. Or that President Trump could solve any of our other large, complicated and stubborn problems right away.

We each—still—have everything to lose.