I find myself mostly unable to write about the Professional Speechwriters Association's World Conference, which we held last week at Georgetown University. 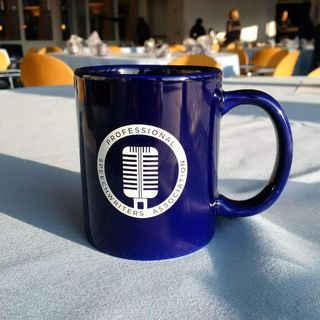 and partly because I don't trust myself not to over-enthuse by saying things like I did at the Vital Speeches website: "Something happened at the PSA World Conference last week. Something permanent."

To which speechwriter (and august PSA Advisory Council member) Mike Long replied, "Don't scare me like that. I was certain this had something to do with herpes."

the familiar combination of exhaustion, relief and bewilderment gives way to a somewhat astonishing understanding, that something significant and permanent took place – See more at: http://www.vsotd.com/news/it-morning-speechwriting#sthash.enchpLPD.dpuf

But goddamnit, it really was a happy couple days for us, and the 120 speechwriters who attended from nine countries.

C-SPAN covered our presidential speechwriting panel, and my keynote conversation with Hillary Clinton's communication consigliere Lissa Muscatine got press in the Washington Post. More importantly, PSA members responded enthusiastically to most of the sessions, and exchanged ideas with one another between sessions in such a frenzy that I had a hard time calling the conference to order.

Late-night barroom belly-laughing aside, probably my favorite moment of the conference came during a half-hour "mentoring" session we set up, so conference participants could give career advice to undergraduate members of the Georgetown Speechwriting Advisory Group. That's a campus club that generates pro bono speeches for cash-poor nonprofit leaders, and portfolio samples for wet-behind-the-ears would-be speechwriters.

Their members volunteered at the conference, working the registration desk and serving as useful arms and legs for our operations director, Benjamine Knight.

The mentoring session was nominally in exchange for the group's help. Their leader, Georgetown senior Will Simons, told me weeks ahead of the meeting, "Everyone is incredibly excited about the mentoring session and some didn't believe me when I told them about it!"

Simons and his colleagues couldn't have believed—even though I had told them—that I'd actually scheduled the session mostly for the benefit of the veteran speechwriters, who because of the scattered nature of their silent occupation, have been largely denied mentors of their own, and the pleasure of advising others.

When the moment arrived, more than a dozen of the undergrads stood at the side of the room, smiling nervously, waiting to be received, one each, into tables of waiting PSA members—speechwriters so eager for the chance just to begin share what they have seen and learned on the long, strange paths they've traveled since they were undergrads themselves. 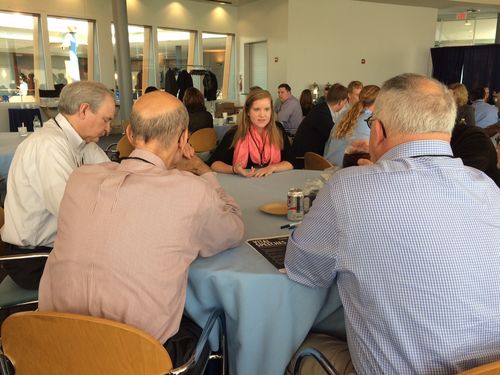 I was sitting at one of the tables, and had to clear a little lump out of my throat in order to greet a freshman who wore my own daughter's guileless smile. Later, amid a Niagara din of so many elders pouring so much wisdom and advice in so little time, a PSA member at our table wanted to offer the girl an internship for next summer. Out of habit, the speechwriter asked if she had a business card.

And then, realizing the girl had only had her Georgetown library card for three weeks, we all laughed—a brand new Georgetown freshman, several veterans of a complicated job in a compromised world, and me.