As The Onion newspaper reports, "Chicago's air now 80 percent bullets." Some people might wonder why anyone would bring a kid up in this environment.

The first answer is, the heavy bullet-to-air molecule ratio is safely limited to desperately poor neighborhoods, and very rarely affects desperately middle-class neighborhoods like ours. I haven't shot anyone all summer.

The second answer is, some of the most beautiful things happen in the city.

Would you believe that my daughter Scout has since kindergarten gone to after-school and also summer camp at a three-acre patch of turf, playground and clubhouse charmlessly called Commercial Park? Sure, you would believe that, because that's just the kind of gritty, shitty city stuff you'd expect.

But what if I told you that this park was spiritually led by a cherubic, enthusiastic and impossibly 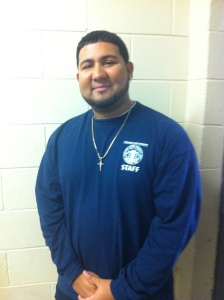 happy young man named Isaac Barbosa, who attended the park as a little kid from the neighborhood and who says in his official bio, "Isaac never wants to grow up; he just wants to be a Commercial Park kid for life! He enjoys working with kids each day, helping them improve skills, and making them laugh."

Isaac loves all the kids, and all the other counselors, who are also from the neighborhood. Isaac loves Scout, only partly because she's a star on the Commercial Park soccer and floor hockey teams. Last month, she thought her retainer had been thrown in the trash, and Isaac cheerfully dug through it with Scout (tearfully) for 20 minutes before she checked her lunch box one more time and found it tucked in a corner, at which Isaac laughed, as relieved as she was that it hadn't been lost after all. "Scout, your parents would have killed you!"

But it is sweet. And the experience Scout has had there over these years—which she thoroughly takes for granted, as she should, because a child should not have to thank people for loving her—has been every bit as safe as anything she would have gotten in a suburb.

And how much richer?