So a novel told through the eyes of a young girl holds up for half a century as a piece of great American literature. And then another novel, written by the same author, presumably based on the same characters but less profoundly imagined and at an earlier stage of creative development, comes out like a turd from the skirt of a uniquely disciplined and now incontinent artist. 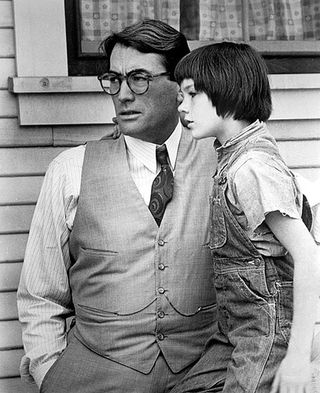 That's sad. But that's all that's sad. The rest of the story makes perfect sense.

In a lousy first draft, the hotshot New York writer from Alabama discusses her discovery that her dear old daddy from Alabama is actually backward in his views. In doing so, she creates a piece of dog-bites-man moralism that interests no one. Then, with the help of a good editor, she discovers that the better way to tell the story is through her younger eyes, as the daughter's idolization of her father, who rises above a community's history and his tribal interests as a beacon of courageous, upright humanity. Shazam! A bad book becomes a good book.

To all the sad sacks out there who just can't believe Atticus turned out so bad: Did you think To Kill a Mockingbird was a newspaper story? It was a novel—imagined as remembered by a woman who, as we now know, was feeling disillusioned about her old man, which is something that happens to every emotionally sentient young adult in relation to every parent who is discovered to be a plain old human being in the end.

Go Set a Watchman is not a book I'll read, because I've got a lot to read and the reviews suggest that, like most first drafts, it's just not that good. But I'm pretty embarrassed for anyone whose heart is broken by discovering that To Kill a Mockingbird was written by a grown woman with a literary license who understood as she wrote it that she had not been raised by God himself. She was lucky enough to remember what it felt like to think so.

When my Scout was born, an older friend of mine remembered how his daughters looked at him when they were little. "They thought I was the greatest guy in the whole world," he said, smiling the saddest and most beautiful smile.